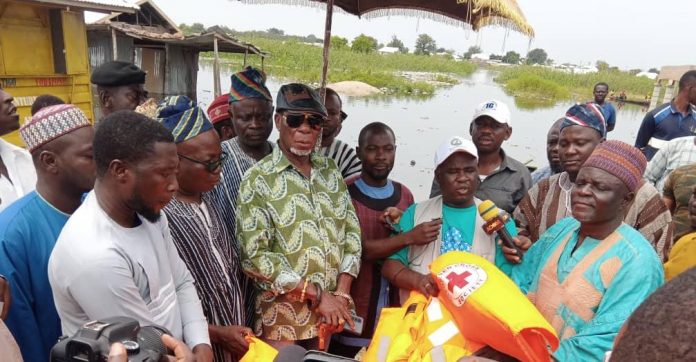 The Paramount chief of the Buipe Traditional area of Gonja, Buipewura Abdulai Jinapor (II) has appealed to the government to come to the aid of his people following the spillage of the Bagri dam of Burkina-Faso.

Close to over 1000 houses have been submerged with over 1000 residents rendered homeless in the Bridge residential area of Buipe which is the business hub of the Buipe.

Buipewura Jinapor (II) appealed speaking to the media appealed to philanthropist and other bodies to come to the aid of his people since many properties have so far been lost with academic activities also coming to a standstill.

Many of the affected persons have been forced to leave their homes. The flooding has also led to the destruction of property and other valuables in people’s homes and workplaces.

The areas that have been hardest hit include the the Buipe cattle market which is the largest in the region.

Residents have thus called on the government to put in place urgent measures to address the issue as sanitation has also become a major issue as toilets facilities and refuse dumps are also being flooded in the process.

The District Chief Executive (DCE) for Central Gonja District Mr Salia Kamara explained that the situation happens every 10 years and plans are underway to construct a bigger drainage system that will help reduce the level of water that enter the area.