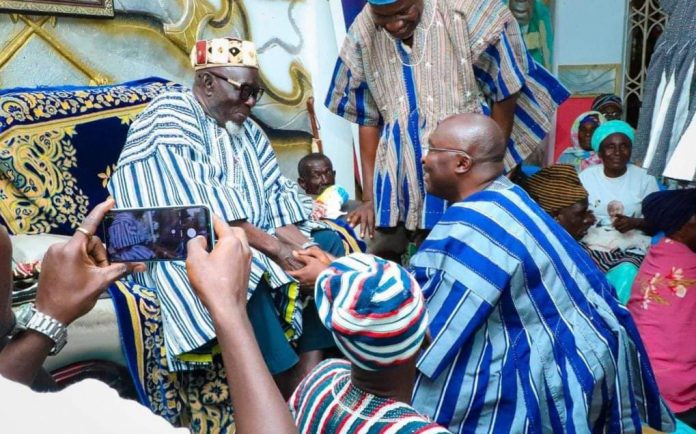 Mr Abdulai Haruna Obey, Secretary to the Paramount Chief of the Bole Traditional Area, Bolewura Kutuge Feso (I) has said, the Bolewura did not endorse or annoint Vice-President Dr Mahamudu Bawumia as being spined

According to the Secretary to Bolewura, “for the avoidance of any doubt and to set the records straight, Bolewura Sarfo Kutuge Feso (I) only wished His Excellency the Vice-President of Ghana good luck in his bid to run for the New Patriotic Party (NPP) Presidential contest”.

“Bolewura Sarfo Kutuge Feso (I) did not endorse any Presidential candidate as far as the 2024 Presidential election is concern”; the statement clarified.

It added; “The Bolewura comment that a comment that; ‘Take that sentence from this place. Your victory is a foregone conclusion’; after his Secretary read a prepared speech cannot be misconstrued as referring to the 2024 Presidential elections”.

The Paramount Chief of the Bole Traditional Area, Bolewura Sarfo Kutuge Feso (I) told Vice-President Dr Mahamudu Bawumia that victory in whatever he is doing is a forgone conclusion.

“Your Excellency, this is the 3rd or so time that you have familiarized yourself with this Palace. The first time you came here during the campaign, I gave you only one sentence; that victory is a foregone conclusion. So victory for you is a foregone conclusion”; the Bolewura said when the Vice President of Ghana Dr Mahamudu Bawumia paid a courtesy call on he (Bolewura) and his Chiefs at his palace on 10th October, 2022.

He added;
“Take that sentence from this place. Your victory is a foregone conclusion”.

These comments are being interpreted by many to mean the Bolewura endorsed Vice-President Dr Mahamudu for the 2024 Presidential elections.