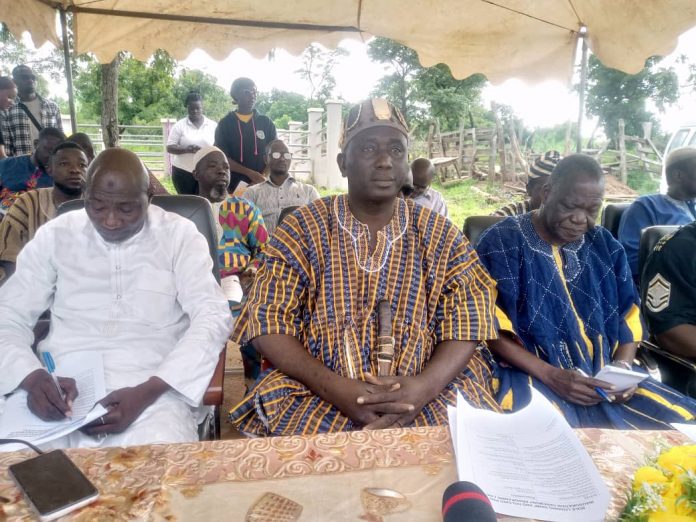 The project was funded by the European Union and the Agence Francaise de Developpement (AFD) and facilitated by Acting for Life (AFL) and CIKOD, under the project title; “Project to Support Livestock Mobility For Better Access to Resources and Markets in West Africa (PAMORARMA)”.

At the ceremony, the Cordinating Director for the Bole District Mr Adams Habib, in his welcome address said the project has since its inception brought joy to the people of Bole especially the District Assembly.

He said CIKOD played an important role right from the beginning to the end and called on the people to express their sincere gratitude to CIKOD.

He added that the cattle market will go a long way to help the district assembly in the mobilization of revenue to complement the common fund that the assembly recieves to address the development needs of the people in the district and also create direct and indirect jobs in the district and is therefore important to uphold it and make it their own so that they can fully enjoy its benefits.

Mr Adams Habib added that the Bole District assembly is much grateful and also appealled to the financiers to come to their aid and by constructing corridors around the neighbourimg countries to ensure the migration of cattle do not distract them as well as the farmers.

The Executive Director of CIKOD, Mr Bernard Guri said CIKOD is more than dealing with Livestock, stating that CIKOD is an organisation that believe that, respect must be given to the Indigenous Knowledge, traditional chiefs and Queen mothers and the resources available as the bases of whatever is done to get development.

He said based on that, they are always staging campaign not only in Ghana but around West Africa and Africa as a whole, where they are known in promoting traditional governance.

He added that CIKOD from the beginning dealt with how to promote the traditional chieftaincy as an alternative government, particularly, the Queen mothers.

He added that before they came, queen mothers were women leaders and were not respected and when they led the cruisade in promoting the queen mothers in Ghana, and now queen mother are respected from the local level to the national and even internationally.

Mr. Guri added that CIKOD also looks at the food system since the citizens around here are mostly farmers, and are mostly known for the livestock projects that they were about to commission and the Deputy Director spoke more about that.

The Deputy Director of CIKOD Daniel Banuoku in addressing the audience, acknowledged the Bolewura and his carbinet for releasing the land for them to put up the edifice at the cattle market and also thanked the District Assembly, the market management, and the herders for the support and corperation they gave  them all through to its finish.

Mr Bonuoku said the importance of the project is that, it is conceptualized to solve the conflict between cattle herders and farmers due to the climate change and these conflicts come as a result of farmers and herders struggling to feed their livestocks.

He said over the period, they witnessed a high rate of mobility of herders and their herds from the Sahelian areas into the coastal areas which has come with associated conflicts betweeen farmers and a cattle dealers which sometimes leads to the deaths of people and livestock.

He added that for over three years, they were analyzing the issue to find a solution to it and in that process, the European Union (EU) invited them to tell them put up an infrastructure project that will support the mobility of herders and their herds with the intention of minimizing the conflicts that characterize the livestock sector in the coastal areas.

He said farmers and herders are  supposed to live in harmony because they depend on each other stating that a person cannot have a good meal without meat supplement likewise meat without food and therefore call for a cordial relationship between farmers and herders.

Mr Banuoku made a point that with the provision of the infrastructure, it is not the end of the game saying that the infrastructure is just combination of concrete and steel which cannot solve the problem unless with the help of the people involved.

He said the problem will only be solved if the people take the steps in changing the perceptions about the livestock trade and giving it all the necessary support it needs at the community, traditional council and the district assembly.

Mr Banuoku added that the infrastructure will be useless if the managers of the market are not being transparent in their dealings and they will be happy to come back to see that there is improvement at the end of December, and are also anticipating an increase in revenue generation for the district assembly.

He appealed to the police and security agencies to reduce the way they stop the herders and how frequently they take money from them.

This he said sometimes make some the livestock die especially when they delay them so much at the stopping point and he also asked the police to put down a policy that will protect the livestock and make transportation easier for them.

Mr Haruna AbdulaiObey, the Bolewura’s seretary who read a speech on his behalf thanked CIKOD and its donor parners for putting up these infrastructure in Bole and Banda Nkwata and still asked that they come to the aid of the Bole people by putting up a big standard cattle market for the people.

He further put down some laws that will be used to regulate the market which state that; No person or group shell transact cattle business outaide the Bole and Banda Nkwanta Markets effective 9th October, 2022; Any person or group of persons caught transacting in cattle without passing through these two markets shall have his or her cattle confiscated and prosecuted accordingly; and any person or group of persons found selling or buying cattle outside these two markets shall be considered as thief and shall be treated as such.

The Bolewura disclosed he will  collaborate with the Savannah Regional House of Chiefs with support from USAID to organize a local dialogue meeting for all Fulani communities within the traditional area including other stakeholders on 19th September, 2022 at the Bolewura’s Palaces and stated that the purpose of the dialogue is to find lasting solution for the farmer-herder conflicts and matters of social cohesion and the region.