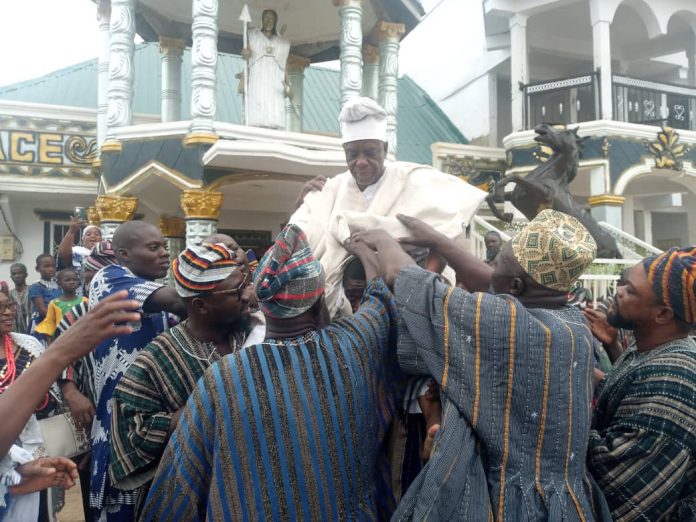 An illustrious son of Bole and a former Coordinator of the National Service Scheme for the Northern Region and later Upper West and Western Regions Mr Silas Natomah has been enkinned as the Gbilinpewura of the Bole Traditional Area on 2nd July, 2022.

In accordance to the customs and traditions the prominent Kingmakers of the Bole Traditional Area were invited to put their statements to the Gbilinpewura before he was accepted.

The new Chief Mr Silas Natomah accepted all the statements made by the kingmakers and was subsequently enkinned as the Gbilinpewura. After the enskinment at the forecourt of the Bolewura’s Palace, the Gbilinpewura was taken into the Palace of the Bolewura to pay allegiance to the Paramount Chief and his Council before he was raised shutdown high amidst dancing and drumming to family house.

Later speaking to Bole based Nkilgi Fm on who is he and his plans for his community, Gbilinpewura Silas Natomah Kankanboni who is a known philanthropist said he had his basic education in Damongo Jakpa Primary school and middle day before attending Damongo secondary school.

He was subsequently transferred many places like Yendi, Tolon, and also became the Northern Regional Coordinator and later transferred to Western Region and to the Upper West region before he retired.

The neww Chief said he is happy to have received the Gbilinpe chieftaincy skin.

Gbilinpewura Silas Natomah Kankanboni further stated that to be a leader of a group one need to be patient and also engage with the people because that will make way for one to understand the people and leave with them in peace.

He added that he will try his possible best to continue the good works his predecessor had done there.
Gbilinpewura said his first priority is to ensure electricity is extended to the Gbilinpe community after the a project to that effect stalled.

He thanked Bolewura Safo Kutuge Feso (I) for the opportunity given him and to the larger Safope Royal Gate for the support they gave him.