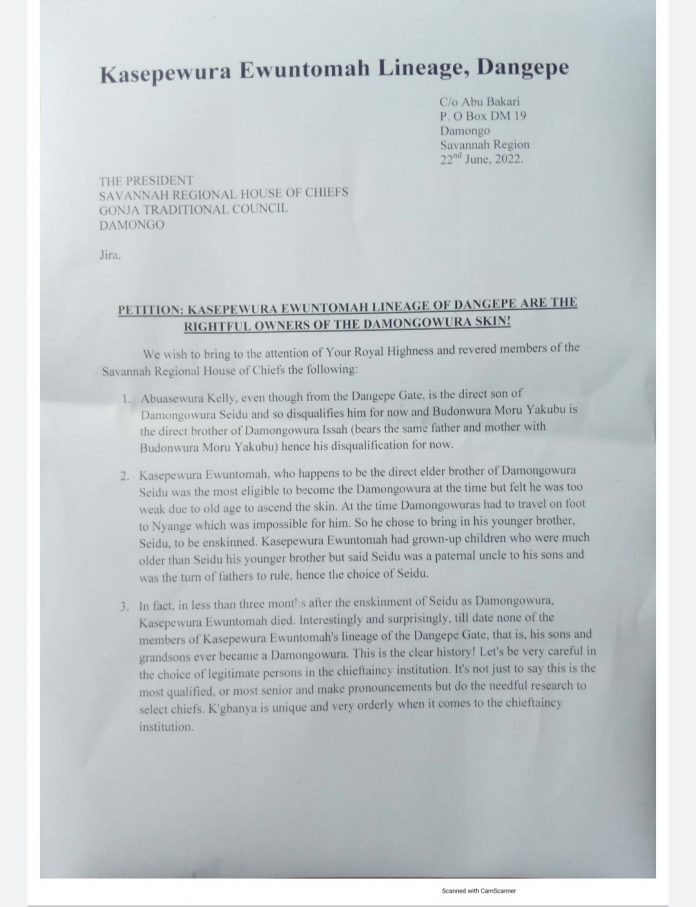 The Kasepewura Ewuntomah lineage said it is their turn to ascend the Damongo skin which they sacrificed for the betterment of the Dangepe gate of Damongo many years ago.

Read the full petition below:

We wish to bring to the notice of your Royal Highness and revered members of the Savannah Regional House of Chiefs the following:

Kasepewura Ewuntomah had grown up children, much older than Seidu but said Seidu was a junior father to his sons and so was the turn of fathers to rule, hence the choice of Seidu.

Based on the above we the undersigned members of the Kasepewura Ewuntomah Lineage of the Dange gate find it expedient to petition your high office to consider our pleasure and declare our gate as the legitimate and most qualified to ascend the throne of Damongowura to avoid future ambiguities.

This was disclosed by the Vice President of the Savannah Regional House of Chiefs Buipewura Jinapor ll in a speed read on behalf of the Overlord on Wednesday 23rd june 2022.

The Yagbonwura’s speech stated;
“I want to extend my passionate appreciation to you all for your endurance in making sure the customs and tradition of the region keep growing steadily”.

Yagbonwura added; “The Eminent Chiefs Committee led by Buipewura Jinapor ll I further encourage you to seal the few Chieftaincy disputes in the Savannah region. I passionately appreciate your efforts in resolving Bole Chieftaincy, Yazori Chieftaincy and many more”.