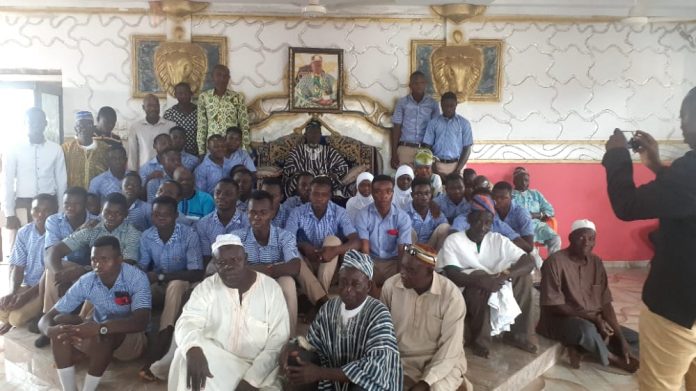 The management, Staff and Students of the newly inaugurated Bole Technology Solution Center, which was formerly known as Rural Technology Facility (RTF) on Friday 17th June 2022, paid a courtesy call on the Paramount Chief of the Bole Traditional Area Bolewura Sarfo Kutuge Feso (I).

He added that, the government of Ghana realised that for the country to develop and solve the unemployment crisis, it is through skills acquisition in addition to the grammar works, hence the Savannah region was given about 3 Technology centres at Bole, Damongo and Salaga Technical Institutes.

The Principal said said admissions are still opened to intrested students who are Basic Education Certificate (BECE) graduates from 2019, 2020, 2021 and 2022.

Bolewura Sarfo Kutuge Feso (l) on his part thanked the leadership of the School for the visit and disclose to the gathering that plans are far advance for him to invite the Bole District Director of Education to his palace to discus how sporting events, quizzes and other educational activities will be organised for second cycle Institutions in his Traditional Area.

Bolewura added that Senior High Schools in the Bole and Sawla-Tuna-Kalba Districts can battle for supremacy soon to to promote with competitions.

He advised the students to be proud of their practical works in the school because it will provide them jobs in future.

Bolewura said many have acquired great certificates in education but lacks jobs and therefore encouraged the students not to be discouraged by what people say about those pursuing Technical skills.

A prominent Queenmother in the Bole Traditional Area
Kansawurche Hajia Ajara Bukari on her part cautioned parents to take full responsibility and send their girl child to the institute to empower the girl child in future. Kansawurche explained how a similar school was established when she was District Chief Executive (FCE) for Bole but given funny names resulting in students abandoning the school which subsequently collapsed.

A supporting Staff of the school, Mr Augustine Jimah said Technical education is backward and so all heads should be on deck to make sure the school succeed.

He said government has seen the importance of Technical education for the advancement of the country.

The Bole Technology Solution Centre in has a population of about 56 students presently, even though the computer placements system placed 110 students to the school, only 56 reported and only one student is from Bole.