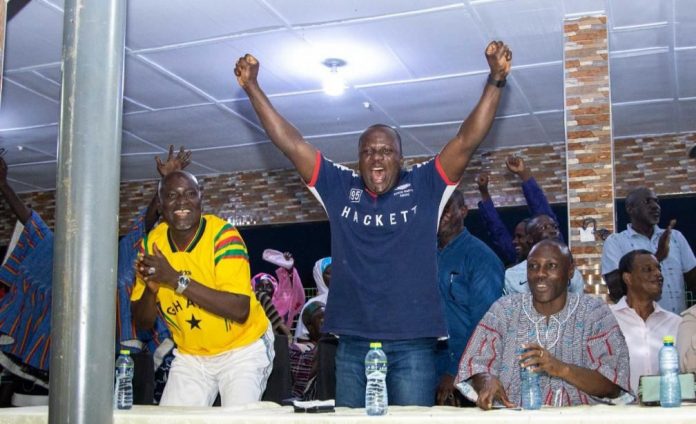 At a ceremony held at Damongo on Saturday, 18th June, 2022 to commission the pitch, Hon Jinapor said, it was unfortunate that Damongo as the capital of the Savannah region for many years did not have a befitting facility to serve as a play ground for development of football talents in the area.

The Damongo said the a astro turf after the commissioning will be opened everyday both day and night to the general public.

He urged the people of Damongo to continue to pray for him and remain united irrespective of their political affiliations to enable them develop the constituency together.

Hon Abu Jinapor explained that, the commissioning of the Astro turf forms part of his responsibility as an MP for the area aimed at facilitating the growth and development of football in the area and that, he was extremely happy to have been able to build such facilities for the people of Laribanga and Damongo adding that, the Astro turf pitch and the numerous developments springing up in the constituency are testimonies that, the government of President Nana Akufo-Addo is working immensely towards the development of the Damongo constituency and the Savannah region as a whole.

He reiterated on his commitment to the development of the area and appealed to the people in the constituency to continue to pray for him and remain united irrespective of their political affiliations to enable them develop the area together.

Hon Jinapor disclosed further that the second Astro turf in the constituency in Larabanga is also ready and will be commissioned next week with two additional astro turf pitches earmarked to be constructed at Busunu and the Canteen electoral areas all in the Damongo Constituency.

On the Damongo Water Project, the MP assured the constituents that all is set for the project to kickstart. He said he is the final paper work has been completed and will soon see the commencement of work anytime soon.

Two Damongo based teams, Mole Nationals FC and Ndewura Jakpa FC locked horns in a ceremonial match to commission the Damongo astro turf pitch with Mole Nationals winning the ultimate trophy, a football and a cash amount of GHc 2,000. Ndewura Jakpa FC who came second in the Gala matches received GHc1,500 and a football with the other participating teams receiving Ghc 1,000 each.

The Damongo MP was joined by the Linguist of the Yagbonwura, Alhaji Iddrisu Afuli Losina , traditional leaders, the clergy, council of elders for the NPP, the Savannah Regional Chairman of the NPP Alhaji Iddrisu Sulemana, the Municipal Chief Executive (MCE) for West Gonja Mr Musah Karim Kusubari, the District Chief Executive (DCE) for Sawla – Tuna – Kalba Madam Barkisu Losina and other stakeholders to commission the project.

Meanwhile, the West Gonja Municipal Assembly is to be in charge of the commissioned Damongo astro turf football pitch.