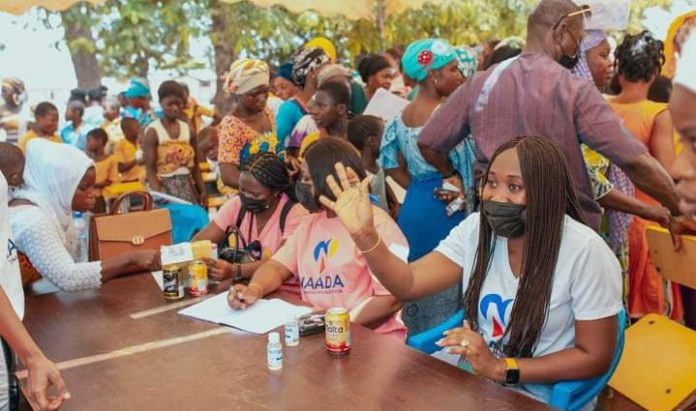 About six hundred (600) children in and around the Busunu traditional area of the West Gonja Municipality of the Savannah Region have been screened by a team of health personnel put together by the Naada Jinapor foundation, a nongovernmental organisation headed by the wife of the Member of Parliament (MP) for the Damongo Constituency, Mrs Naada Jinapor.

The exercise which took place on Friday 4th March, 2022 was aimed at improving the health and well-being of the children in the Damongo Constituency and beyond.

The children were screened for eye problems as well as diseases such as Hepatitis B, malaria and other health related conditions by the medical team with medications given out to the children for free.

Madam Jinapor in an interview with Bole based Nkilgi FM indicated that
as a matter of priority, the Naada Jinapor foundation is committed to bringing quality and free primary healthcare to as many women and children as possible not only to the Damongo Constituency but the entire Region and Ghana as a whole.

She added that it is a healthy people especially women and children that makes a wealthy nation so while providing developmental projects, we must also as well seek their healthcare delivery.

She used the opportunity to thank both parents and teachers in the Busunu traditional area for cooperating with the medical team in making the exercise a successful one.

Madam Jinapor further disclosed that in the next three months, her foundation will embark on another medical outreach program for children in the Achubunyor- Jonokponto electoral area also in the Damongo municipality.

The assembly man for the Busunu electoral area Hon. Dari Osman on behalf of the people of his electoral area commended the Naada Jinapor foundation for what he described as selfless efforts in bringing healthcare services to the children in the area free of charge to improve upon their health status.

He said the free health screening which was the first of its kind in the Electoral area was a timely intervention and necessary especially at this time of the year.

He also used the opportunity to thank the member of Parliament for the Damongo Constituency and the minister for lands and natural resources Samuel Abu Jinapor for his continues efforts in the development of the Busunu electoral area.

This is the third time in less than six months the non- profit organization headed by the wife of the MP for the Damongo Constituency is engaging in a medical outreach program in the West Gonja municipality.