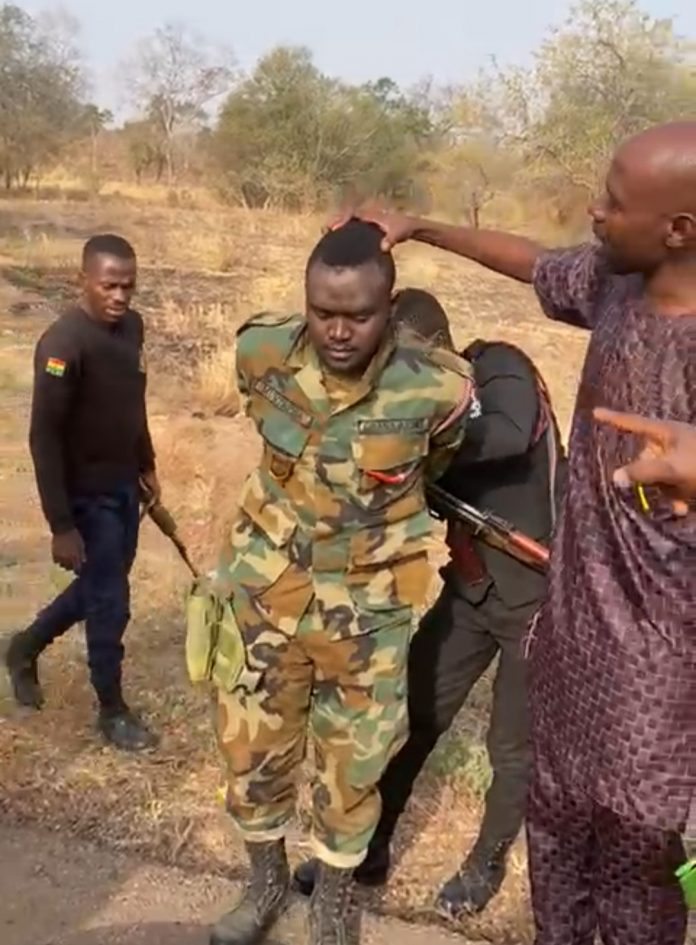 A 5 member gang of suspected car thieves have been arrested by the Buipe Highway Patrol team in the Savannah Region on 23rd January, 2022 following the snatching and robbing at gunpoint a Toyata Camery Vehicle and other items in Tamale and fled towards Buipe direction in the Savannah Region.

The suspects who were in two vehicles with registration numbers AS8445-19 and GX6923-20 were intercepted and arrested by the patrol team at the Sawaba Police checkpoint with the suspects brought to Buipe Police Station.

A search conducted on them by the police found the 13 mobile phones, one Falcon Foreign Pistol loaded with 9mm ammunition, a wallet containing a bunch of keys together with two handcuffs key, two Voter’s ID Cards, Melcom card, Access Bank card and cash the sum of GHc21.20p.

Some military uniforms, Police Ballistic helmet and some police uniforms were found in the Toyota Camry Spider with registration number GX6923-20. The items were retained whiles with the suspects detained

The Northern Regional Police CID and four armed men who were pursuing the suspects arrived at the station together with one Adam Abdul-Gafaru of Tamale who is allegedly the robbery victim.

Adam Abdul-Gafaru identified one of the vehicles used by the suspects as his and allegedly claimed the vehicle was taken away from him at gunpoint including other items at his residence at Banvim-Jonshegu a suburb of Tamale.

This is not the first time Tamale is recording cases of car snatching.

It will be recalled that in October last year, a brand new Toyota Landcruiser V8 Vehicle, yet to be registered, but with DVLA number plate DV 6580 A and a cash amount of 8,000 Cedis were snatched at gunpoint by two armed robbers in an overnight attack on Hajia Sawdatu, owner of Fatawu Bicycle, a popular food restaurant in Tamale.

The incident happened at Jisonaayili, a suburb of the Northern Regional capital left the woman and her family traumatised despite the fact that nobody was harmed from the attack.

Another Toyota Prado belonging to a pastor was also snatched and taken away by robbers who trailed him and seized the car at his residence at Kanvili. Nothing has been heard of the car nor the documents that were in it when it was taking away by the robbers.