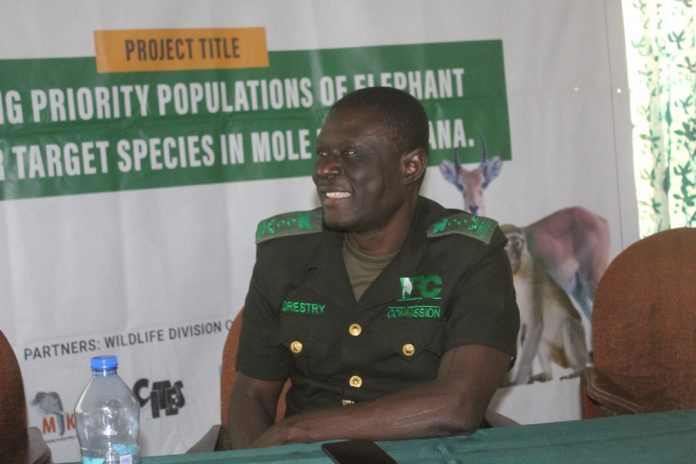 The Mole National Park in the Savannah Region of Ghana was privileged to be selected by the Monitoring the Illegal Killing of Elephants (MIKE) and the Convention on International Trade in Endangered Species of Wild Fauna and Flora (CITES) Secretariat for EUR 600,000 grant to fund a project entitled; “Protecting the Priority Population of elephant and other target species in Mole National Park-Ghana”.

The grant is to be disbursed over a period of three years and will support in the enhancement of park capacity for law enforcement through the training and resourcing of park rangers to include a 4×4 vehicle, fuel, communication system and field gear among others.

The MIKE programme is an international collaboration that assesses and documents levels, trends and causes of elephant mortality to facilitate decision-making that affect the conservation of elephants across range states in Africa and Asia and the Programme was established by the United Nations Convention on International Trade in Endangered Species of Wild Fauna and Flora (CITES) in 1997.

Speaking to Bole based Nkilgi FM, the Manager of the Mole Park Mr Ali Mahama said the MIKE Programme is entirely dependent on donor support with the European Union (EU) being the most important donor for the programme.

He said the EU has funded the implementation since its inception in 2001 in Africa and 2017 in Asia.

“In Ghana, the Mole National Park is one of two active MIKE sites and the Park which is approximately 4,577 sq. km in size and holds the largest and most viable population of savanna elephants in the country”; Mr Mahama said.

The Mole Park Manager said the project will support the rehabilitation of existing outposts and the construction of new sub-range outposts with ancillary facilities in poaching hotspots to ensure the effective protection and maintenance of park security and integrity.

He further said the agreement for the implementation was entered into by the Wildlife Division of the Forestry Commission and the MIKE Secretariat in July 2021 and implementation has since commenced.

He added that specialized training for seventeen (17) Law Enforcement Managers in SMART and Geographic Information Systems, Surveillance or Intelligence gathering and Investigations and Court procedures will be provided adding; “provision of food ration and other patrol inputs to field rangers to support extended patrols and special operations; repair, servicing, and operational maintenance of five vehicles and two tractors to facilitate deployment of rangers and distribution of food rations to the Range camps will be part of the project”.

Mr Ali Mahama also said the transportation of materials as well as rehabilitation, repair and cleaning of law enforcement deployment tracks, roads and Park boundary; rehabilitation and maintenance work at the Jang range outpost made up of masonry, carpentry, plumbing, electrical and painting and rocurement processes have also commenced for the procurement of a project vehicle (4×4), communication system for the park and field equipment for park rangers.