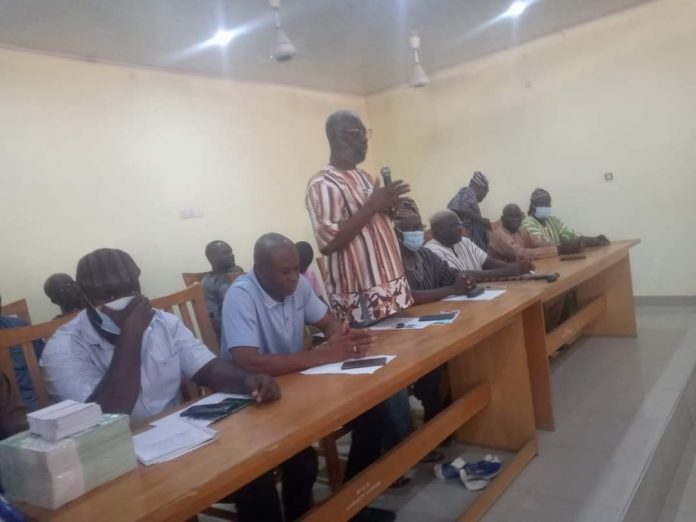 The Member of Parliament (MP) for the Bole Bamboi constituency, Hon Alhaji Yussif Sulemana and National Democratic Congress (NDC) constituency executives received a team of party stalwarts from the national headquarters in the persons of former General Secretary, Alhaji Hudu Yahaya, Former Agriculture and Northern Regional Minister , Bale-wura Seidu Iddi, Savannah Regional Secretary of NDC, Mr Salisu Be-Awuribe and many other in Bole on 19th January, 2022 for a sensitisation meeting on the NDC card replacement.

The delegation addressed a forum of party cadres, former appointees, party women front, the party youth and footsoldiers gathered at the conference on the party card replacement and how it was going to be done for existing card holders first as well as the card replacement exercise on the electronic and manual card platforms.

The leader of the delegation, Alhaji Hudu Yahaya, underscored the need for all party faithfuls to take ownership of the party by taking steps to replace their cards which elapsed after the 2020 elections and urged for all to see the party as their personal property.

The MP for the Bole Bamboi constituency Hon Alhaji Yusif Sulemana on his part admonished all party faithfuls to religiously make it a duty to pay their dues in a timely and consistent manner in order that they can have full- fledged rights to make certain inputs, claims and demands from the party and to show commitment to the party in person and spirit. He averred that should this be done, the party would not have a compelling need to go cup in hand, soliciting for funds to undertake party administrative and election programs.

The Savannah Regional Secretary of NDC Secretary, Mr Salisu Be- Awuribe during a question and answer session, took participants through the process of party card replacemen, insisting that this replacement exercise is meant for only existing card bearing members and not new members seeking to enter the nominal roll.

In house party issues were discussed at length at the forum paving way for the delegation to head to other constituencies.

The NDC party is embarking on a national membership card replacement exercise and has sanctioned teams to lead the various Regions and constituencies across the country.