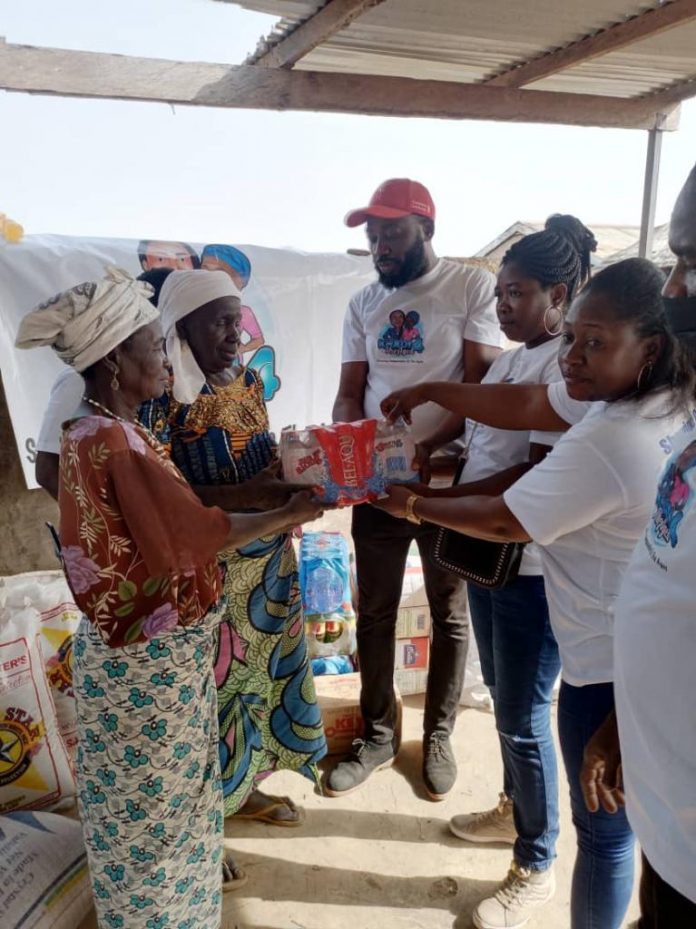 A United States Of America based nonprofit making organisation, “Khadi4 “The Aged” whose mission is to spread awareness and sensitise about the afflictions that plague the elderly people around the world with the ultimate purpose of alleviating the suffering that these cherished members of society are experiencing has donated items including Bags of rice, Crete of drinks, Cooking oil, Bottled water among other items to the Gushegu witches camp in Gusheigu in the Northern Region.

Chief executive Director for “Khadi4 The Aged” Miss Sofo Khadija aka DJ Khadi, a Ghanaian based in US said the foundation intends to support programs designed to educate the youth of the world about the ailments that older people often suffer from in order to quell the abuse too often visited on senior citizens who suffer from dementia, including Alzheimer’s disease.

Presenting the items on behalf of the e
Executive Director Miss Khadija Sofo and the entire organization, Mr Zakariah Mohammed indicated that upon hearing the plight of the women, the organisation decided to offer a helping hand to them and assured them of more support from the foundation.

Revealing the brain behind the establishment of the organization, Mr Zakaria stated that the Executive Director was raised by an old lady and that gives her the love for the aged.

The NGO according Mr Zakariah, is also aimed at sensitizing the youth on some implications that comes with growth.
“When we were kids we were behaving like you behave now” he said.
He pledged that the NGO will always come to their aid as it is poised to extend it’s good works to some other camps in the North.

Receiving the items on behalf of the home, the spokes person for the camp who is only known as Memunatu expressed their gratitude to the NGO for their kind support, adding that it will go along way to sustain them for some time.

“We don’t get any support here, if not because you people have brought this food items”, she lamented.

Madam Memunatu among other challenges facing them at the camp, said they don’t have electricity, the only solar panels that were providing them with electricity is currently not functioning. She also mentioned that the road linking the camp to Gushegu town is also in a deplorable state which when worked on will be of greater benefit to them.

When asked whether she will go back home when given the chance, Madam Memunatu said for fear of being lynched, she will not go back home now until she is very old.

She called on government, NGO’s and individuals to emulate the kind works of “Khadi4 The Aged” by coming to their aid since life is unbearable for them.

The camp which is about sixteen years old host 150 old women who on one way or another is being accused of witch craft from their various communities and are forced to be brought to live there indefinitely.

Speaking to Miss Sofo Khadija, founder for “Khadi4 The Aged”, she said the elderly who are afflicted with mental illness are routinely abandoned, humiliated, physically abused (even beaten to death), and generally tormented by younger people whose understanding is clouded by superstition and false beliefs with young persons often believing that the dementia suffered by the elderly are caused by spirits.

She added that the youth are not aware of the medical causes of these conditions since this problem is particularly acute in the developing world.

She promised to use her foundation, “Khadi4 The Aged” to administrate programs designed to alleviate this social crisis and also launch a pilot program in Ghana that will serve as a model for similar programs around the world to foster awareness and to combat elder abuse wherever it exists, including the United States.

She added that she is taking it upon herself to not only speak up but to educate the youth about the causes and symptoms of Alzheimer’s and dementia which often results in the aged talking to themselves, which is often viewed as witchcraft.

Miss Khadija further indicated that her team in New Jersey in the United States Of America and their Partners in Ghana at large will embark on a program of education to inform young people of the reality of the plight of the aged and also to serve as a voice on for the vulnerable elderly so that they may receive compassion and escape from misery.

”It is not a crime to be old and an old and vulnerable woman or man is not a witch or wizard” she added.

She promised that her team and board members will continue to visit some of the so-called witch camps to ascertain the needs of these older folks who have been rejected and kept in isolated and deprived camps and also look for any disadvantaged Aged hiding anywhere to offer their support.