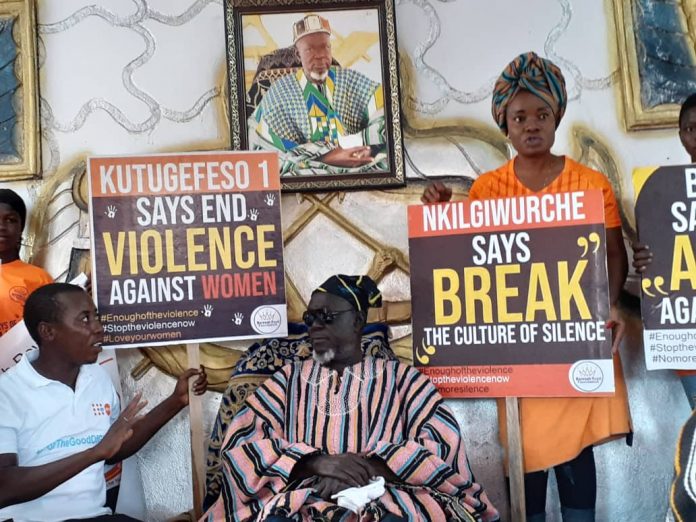 The Bole Traditional Council area under the leadership of the Paramount Chief Bolewura Sarfo Kutuge Feso (I) on 3rd December, 2021 joined the Boresah Royal Foundation and its partners to organise a sensitization on Gender based violence within the Bole District.

The event was held at the forecourt of Bolewuras Palace where he welcomed sub- Chiefs, Queen mother’s, the Chief Imam, the Media, Boresa foundation and other stakeholders to his palace to celebrate the day.

Bolewura thanked Boresa Royal Foundation for the tremendous work the Organisation is doing to raise and empower women and girls in the Gonja Kingdom most especially the Bole Traditional Area.

Bolewura admonished that, violence against women and girls is a grave violation of human rights which happens in public and private places. It has many forms which range from domestic or intimate partner violence to sexual harassment and assault, female genital mutilation, trafficking, sexual violence in conflict and gender-related killing.

He said, “The impact of violence ranges from immediate to long- term physical, sexual and mental health consequences for women and girls, including death. It also negatively affects women’s general well-being and prevents women from fully participating in the society.

The Bole Paramount Chief also said “Violence not only has long- lasting consequences for women but also their families, the community and the traditional area at large. It also has tremendous costs, from greater health care and legal expenses to productivity losses, impacting national budgets and overall development”

He enumerated unprecedented number of laws and policies against various forms of violence passed.

He however said, challenges remain in implementing these measures were many women in the Bole traditional area still lack access to free or affordable essential services in sectors such as Health, Police, Justice and Social support to ensure their safety, protection and recovery.

He therefore charged the Boresah Foundation and the World Association of Girl Guides and Girl Scouts shall to develop a non-formal curriculum to end violence against women and girls in Bole traditional area, designed for various age groups ranging from 5 to 25 years.

Speaking at the Bolewura’s Palace, the Executive Director of Boresah Royal Foundation Queen Boresah Nkilgiwuriche said every 25th November to 10th December has been earmarked annually as International Day for the Elimination of Violence against Women.

We are talking about issues of rape, child marriage, witchcraft accusations Girl child education and mostly importantly gender base or domestic violence.

The Gender-Based Violence campaign is an international campaign to challenge violence against women and girls.