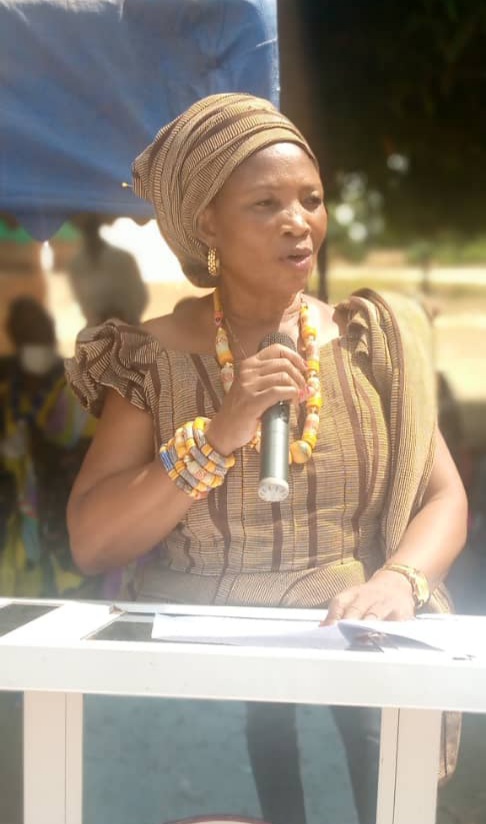 The District Chief Executive (DCE) for the Bole Districtof the Savannah Region, Madam Veronica Alele Heming has said that it is refreshing to give recognition to farmers and fisher folks for the huge role they play in the socio-economic development of the country.

She said; “Ghanaians owe a huge dept of gratitude to our farmers who produce food to feed us and also produce the bulk of raw materials for export such as Cashew, Shea butter, Cocoa etc. to earn foreign exchange and challenged the Youth to go into farming adding that it is through farming that our fore-fathers made us what we are today.

The DCE for Bole made these comments on 3rd December, 2021 at the 37th edition of the Ghana National Farmers Day celebration of the Bole district in the Savannah Region which was held at Tinga under theme “Planting for food and jobs; consolidating food systems in Ghana”.

Farmer’s Day which was instituted by the government of Ghana some thirty seven (37) ago is aimed at appreciating and motivating the hardworking gallant farmers and fisherman across the country.

This year’s ceremony at Tinga in the Bole District brought together farmers, fisherman, agro business agents and other stakeholders in the Agricultural industry.

Speaking to Bole based nkilgi fm, The Chairman for the occasion, Chief of Tinga, Tingawura Alhaji Seidu Sampson Abudu, a former DCE for Bole in the Professor Atta Mills administration said, Tinga is fast growing community which main economy activities are farming, small scale mining, agro businesses among others. Gariba Tingawura added that, there is relatively peace in Tinga and therefore, chosing Tinga for this year’s ceremony was not out of place. He acknowledged the organizers, all stakeholders and the award winners. Gariba Tingawura used the opportunity the appeal to the Bole district assembly and other benevolent organizations to assist Tinga with an abattoir, durst bins, and big containers for refuge.

The Bole District Director of Agriculture, Alhaji Ibrahim Mumuni acknowledged all stakeholders who supported the Ministry of Food and Agriculture (MOFA) in this year’s farmers day celebration. Alhaji Ibrahim Mumuni said, an efficient agricultural productivity will result in abundant food, improve health and increase both domestic and foreign exchange earnings, and Once there is improvement in income, people will be committed to their tax obligations.

He said the Bole district benefited from the Savannah Investment Program (SIP), a total of number of 661 sheep was distributed to 25 out-breeders made up of 16 males and 9 females across the district.

The Bole district Director of Agriculture also said, to reduce the mortality and morbidity in animals, the Bole district Veterinary Personnels vaccinated 34,000 cattle, 2,000 sheep and goats and 25111 poultry against CBPP, PPR, Newcastle, Gumboro and fowl pox diseases respectively. He added that, Ante-moryem and Post-mortem examination were conducted on cattle, sheep, goats and pigs to ensure that apparently healthy and wholesome carcasses were made available for public consumption.

Alhaji Ibraihim hinted that, in collaboration with Productive Safety Net Project, a total number of 152 goats were distributed to 70 beneficiaries made up of a male and 69 females across the district.

He said even though Agriculture in the district has a lot of potential and comparative advantage, it’s development is being hampered by destruction of farms by Alien Herds, Scarcity or High cost of farm labour, lack of subsidy fertilizers for farmers, inadequate credit facilities for farmers, high cost of farm inputs or machinery, indiscriminate bush burning, inadequate staff and staff accommodation.

He congratulated the gallant farmers, the award winners and encouraged the youth to venture into farming.

A total sixteen (16) best category farmers were awarded at the ceremony.

Mr Umar Soaley Moses from Maluwe was adjuged the Bole district overall best farmer. For his price, he took home, a Tricycle, a radio cassette player, pair of wellington boot, Cutlasses, One Knapsack Sprayer, Full piece of Wax print, pieces of Mosquito net and a Certificate. Sigartey Peter Manu from Tinga was the 1st Runner up and Nana Fatawu from Jugboi took the 2nd Runner up award.