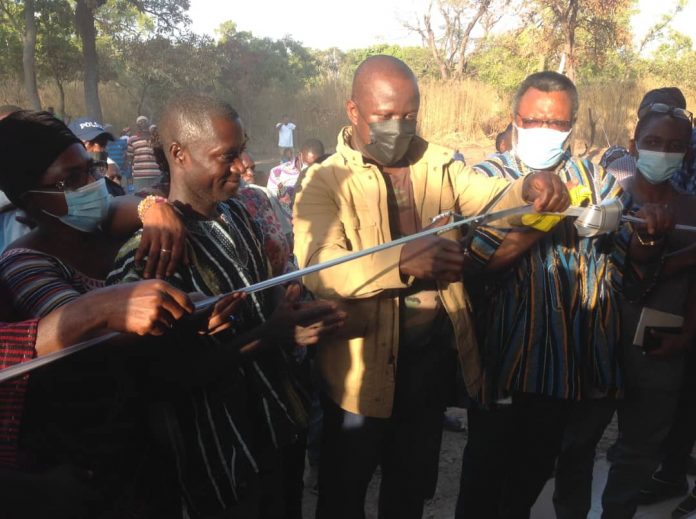 The Member of Parliament (MP) for the Damongo Constituency and the Minister for Lands and Natural Resources has commissioned and handed over a CHPS Compound facility to the people of Mognori in the West Gonja Municipality on the Savannah region.

The health facility which is worth over Gh¢197,700.00 including accommodation unit of health professionals seeks to solve the health needs of the community.

He added that the decentralization of development is key to the government hence the decision of the government to construct the project in its bid to make healthcare accessible to all and the project will go a long way to serve the people of Mognori and also spare them the stress of traveling to surrounding communities to access healthcare.

Speaking at the event, the Deputy Savannah Regional Health Director, Mr Albert Saklo thanked the MP and Minister as well as the government for the construction of the project aimed at making quality healthcare accessible to the people.

He affirmed the adage that “a healthy nation is a wealthy nation” and therefore entreated all stakeholders within the electoral area to make healthcare a mutual responsibility by aiding the professionals in service delivery for the benefit of all.

Mr Saklo used the opportunity to appeal to the people of the area to vaccinate against the fast spreading yellow fever which according to him has claimed 29 lives in the Savannah Region with many more still on admission in the hospital battling the outbreak.

The Municipal Chief Executive (MCE) for the West Gonja Municipal Assembly, Mr Karim Musah Kusubari noted that Hon. Samuel Abu Jinapor after securing the project for the community was very vibrant and supportive during its construction.

The MCE disclosed;
“It was the Hon. MP who paid for all the expenses of this project. He paid for the electricity extension, purchasing of beds and benches for both staff and patients and also bought a motor bike for the health professions to aid their work. But please don’t attached politics to this project because it is for all so if you do so as an individual, you will be doing so at your own disadvantage”.

Mr Kusubari called on the people to contribute their quota in taking good care of the project and also make the community very conducive for the health professionals who will be serving their health for their mutual benefit.

The Assemblyman for the Mole/Mognori electoral area, Hon Eric Bani Danaba in an exclusive interview with Bole based Nkilgi FM expressed his heartfelt gratitude on behalf of members of his electoral to the MP for the Damongo constituency for the intervention and promised to ensure that they will put the health facility to the utmost use.

Hon Bani Danaba who is the longest serving assembly member in the West Gonja Municipality, however, tabled before the MP and Minister other concerns of the community which includes lack of portable drinking water, poor road network, renovation of the community Kindergarten school among others.