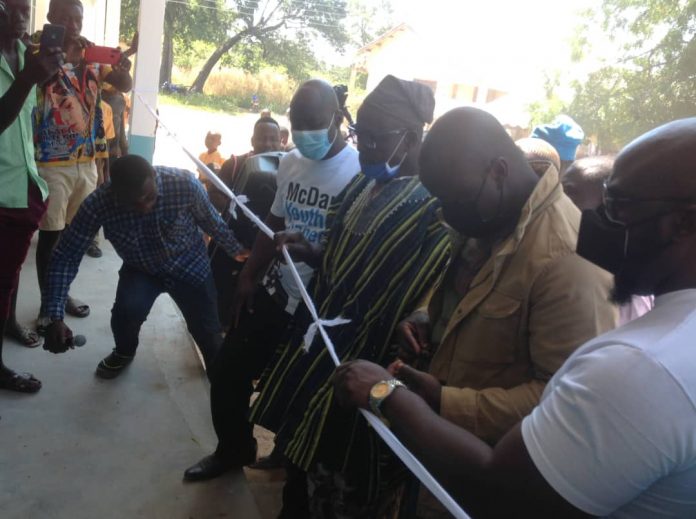 The McDan Foundation, a charity organisation in collaboration with the Member of Parliament (MP) for the Damongo Constituency, Hon Samuel Abu Jinapor have constructed a 6 unit modern classroom block and a mechanise borehole for the Mempeasem community in the West Gonja Municipality of the Savannah Region.

9The gesture forms part of the groups social corporate responsibility and its contribution to the improvement of quality education in the area.

The MP for the Damongo Constituency and Minister for Lands and Natural Resources, Hon Samuel Abu Jinapor who joined some representatives from the foundation during the handing over ceremony of the building on 20th November, 2021, expressed his sincere gratitude to the executive director of the foundation and his team for the kind gesture which he noted will go a long way to serve the community.

He noted that development will best take place when one is made known of the pressing needs of the people and hence called on the people that the doors of his office are always opened to them.

Hon Samuel A. Jinapor also added that the group in partnership with his office have drilled 15 boreholes in the municipality which shall be commissioned whiles plans are far advanced to drill additional 10 boreholes for the Fulani communities within the area.

He further assured the people of the Mempeasem community of the construction of a toilet, renovation of dilapidated classroom blocks and the fulfillment of all other pressing needs of the people.

He added that as the Lands and Natural Resources Minister, he is working very hard for the creation of a forest reserve in Soalepe and other communities which shall be of great benefit to the people.

He further disclosed that the Vice President Dr. Mahamudu Bawumia will be launching the Shea landscape restoration program which is worth $55M in Tamale next Friday (26th November, 2021) which will bring a great improvement in the agriculture sector most especially for the people of the five northern regions.

The Assembly man for the Achubunyor- Jonokponto electoral area, Hon. Kipo Yakubu on behalf of the chiefs and people of his electoral area thanked the MP for fulfilling his promise of getting the area a befitting school.

He said the project is the first of it’s kind in the area and assured the mp and his team of taking proper care of the school.

He appealed further for the renovation of the old school block and further urged the MP to help the school in getting furniture to be able to solve the furniture problem in the school.

The Assembly member again appealed for the construction of a teachers quarters to accommodate teachers posted to the area since most of them travel from Damongo to the school on daily basis.