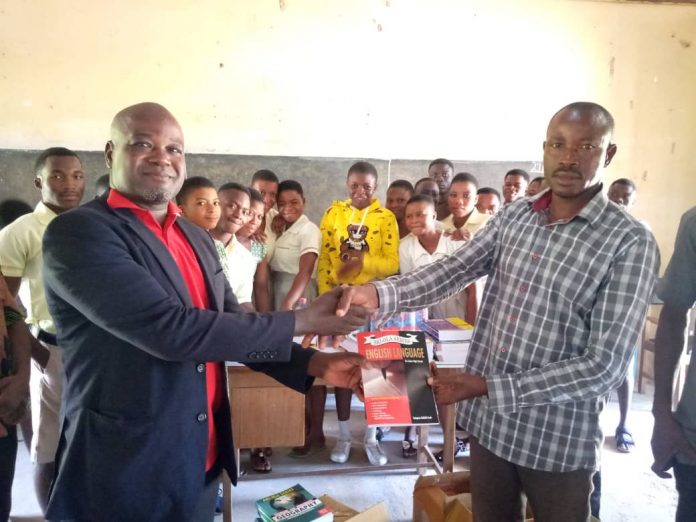 The Bole Cooperative Cooperative Union on Friday 29th October 2021, donated Texts Books to the Tinga Senior High School in the Bole District as part of its vorporate social responsibility.

Addressing Students and Staff of the School, the general Manager Mr Issah Fuseini said the institution received a letter from authourities of Tinga Senior High School to come to its aid as the school faces a lot of challenges.

According to him, the Bole Cooperative Credit Union board met and decided to assist the school with the Text Books to aid them in learning.

The Tinga Senior High School authorities and stakeholders of the community were grateful for the donations and stated that the donation will go a long way to impart teaching and learning in the School.

The Headmaster of Tinga Senior High School, Mr Sijaambo Samuel said the School was grateful for the donation and that, the texts books will be put into good use for the benefit of the students.

The Chairman of the Parents Teacher Association for Tinga Senior High school, Mr Adams Abdulai on behalf of the Parents and all stakeholders thanked the Bole Cooperative Credit Union for the kind gesture.

Meanwhile, shortly after the donation, the Branch Manager of the Credit Union in Tinga Mr Amanfo Adams appealed to the general public to do business with the Credit Union since it is a credible institution.

Speaking to Bole based Nkilgi FM, he urged everyone to cultivate the habit of savings for future usage.

An amount of about GHc4000 was to used to purchase the texts books which include Core Mathematics, Core English, Core Science, Core Social Studies, Geology, Economics and History.

Several stakeholders witnessed the donation made to the school.