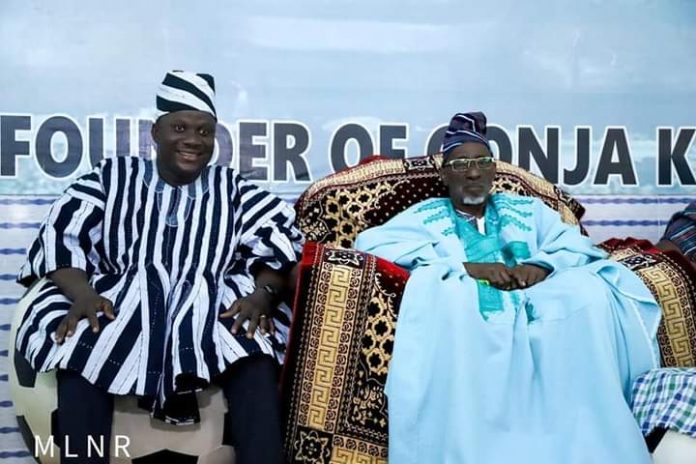 The President of the Savannah Regional House of Chiefs and Overlord of Gonja, Yagbonwura Tuntumba Boresa Boresa (I) has assured the Minister for Lands and Natural Resources and Member of Parliament (MP) for the Damongo Constituency Hon Samuel Abu Jinapor of the readiness of the Regional house of Chiefs and the people of his Kingdom to fully support him protect the vegetation cover and environment of the Savannah Region.

The Yagbonwura in an address to the minister at the Jakpa Palace at Damongo during a courtesy call on him and members of the Savannah Regional house of chiefs commended the minister for the Green Ghana initiative which saw the planting of some 5million trees in June, 2021 put together by the of Lands and Natural Resources and described project as very timely since it will succeed in augmenting the restoration of the Ghanaian vegetation cover.

The Yagbonwura again indicated that the ban on rosewood and commercial charcoal business has pushed many of the youth in the Savannah Region into farming and added again that the Savannah region will forever be proud of him for his hardwork and implementation of projects such as the Consultative National Dialogue engagement on the environment that fully gave birth to the streamlining and restructuring of ”Galamsey” activities in Ghana and also the popular Green Ghana Project.

He also used the opportunity to inform the minister that the house has banned commercial charcoal business, rosewood related businesses and commercial fuel wood harvesting in the efforts to end deforestation especially in the Savannah Region.

The Overlord of Gonja added that the ancestors of the Gonja kingdom is fully behind him in his quest to salvage what his great grandfathers had left for the kingdom.

Hon Abu Jinapor who is on a five-day working visit to the five northern regions’ thanked the Yagbonwura, his chiefs and people of the Savannah region for their continues support and prayer for him in his role as the Minister for the Lands and Natural Resources.

The Minister for Lands and Natural Resources asked for prayers from the people of the Gonja Kingdom to be able to fully succeed in his ministry.

The Paramount Chief of the Buipe Traditional area and Vice- President of the Savannah Regional House of Chiefs Buipewura Abdulai Jinapor (II) said the Minister is his biological son disclosimg that, Hon Abu Jinapor the since his days as a Primary School Pupil has been a hardworking boy and know very well that the Minister since he was appointed will not relent in his efforts to succeed in that field.

Buipewura Jinapor (II) expressed his gratitude to him on behalf of the Savannah Regional house of chiefs for his hardwork and assured the chiefs and people of the newly created Savannah Region that they will see a different Savannah Region in the next 4 years.

He however tasked everybody to support the young minister and his office with prayer since he has a lot to achieve in his role as the sector minister for lands and natural resources.