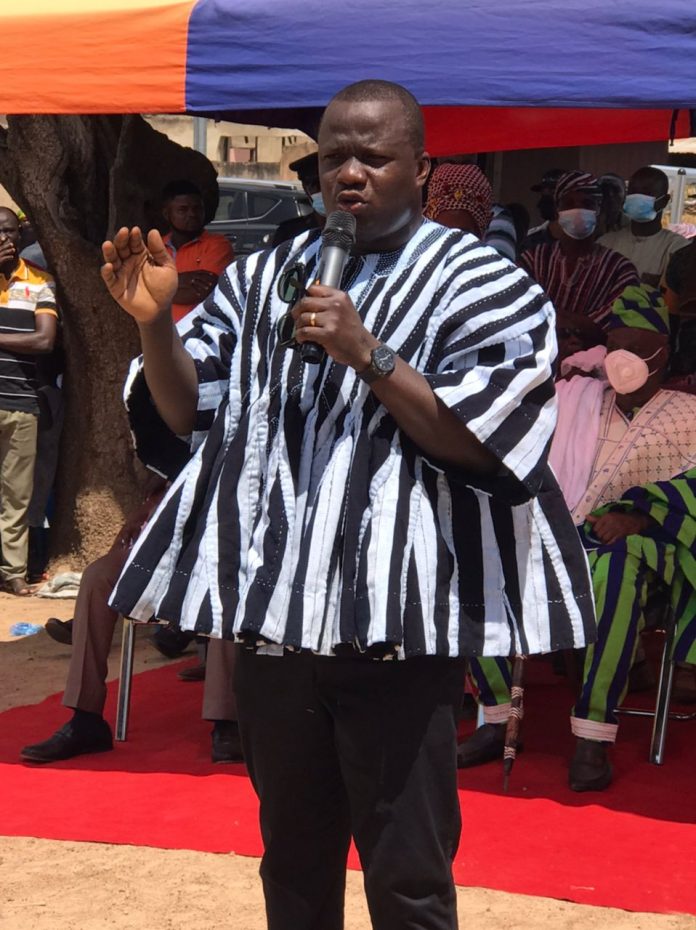 The Minister for Lands and Natural Resources and Member of Parliament (MP) for the Damongo Constituency of the Savannah Region Hon Samuel Abu Jinapor has told the Chiefs and people of the Bole Traditional Area that the President Akuffo- Addo government is never against small scale mining but some practices such as mining in river bodies,mining without reclamation and the use of mercury and cyanide.

The minister who is on a five-day working visit to the five Regions of the North added that, government is not against small scale mining in the country but seriously against irresponsible mining that degrade the environment and urged the chiefs and people of the Bole Traditional area to help his ministry to develop the small scale mining sector in the country.

Mr Jinapor who is on his final working visit to the Savannah Region on 9th October, 2021, admonished the people of Bole and it’s environs to embrace environmentally friendly mining practices that will benefit everyone.

The Paramount Chief of the Bole Traditional Area Bolewura Sarfo Kutuge Feso (I) in a speech read on his behalf described the MP for Damongo as the beacon of hope for the youth of the Gonja Kingdom and Savannah region as whole which the minister must see himself as such.

Bolewura Sarfo Kutuge Feso further used the opportunity to commend the Damongo MP President Akufo-Addo for the steps taken in recovering and sustaining the ecosystem of Ghana through the implementation of pragmatic policies such as the Green Ghana and community small scale mining initiative.

The Bolewura appealed to the minister to look into a land dispute between Gonjas and Bandas since the Banda people persistently continue to issue threats and illegal claim of ownership of certain lands of Gonja Kingdom (Dokochina).

The Minister of Lands and Natural Resources at a separate meeting with the Bole zonal Branch of the Ghana National Association of Small Scale Miners (GNASSM), petitioned him to consider enrolling five communities in the Bole area onto the government’s flagship community mining scheme initiative.

The miners asked him to give concessions to Dollar-Power, Banda Nkwanta, and Kui including Cloth and Sakpa to facilitate the activities of mining in these areas and further provide jobs to the youth in the area.

The minister in a response noted that it will not be his time as the minister for lands and natural resources that miners will have their work compromised adding that he is indeed working hard to promote responsible mining in the country.

He appealed to the miners and the people of the area for their support since his success in the fight against galamsey will not be victory for him alone but the entire Gonjaland.