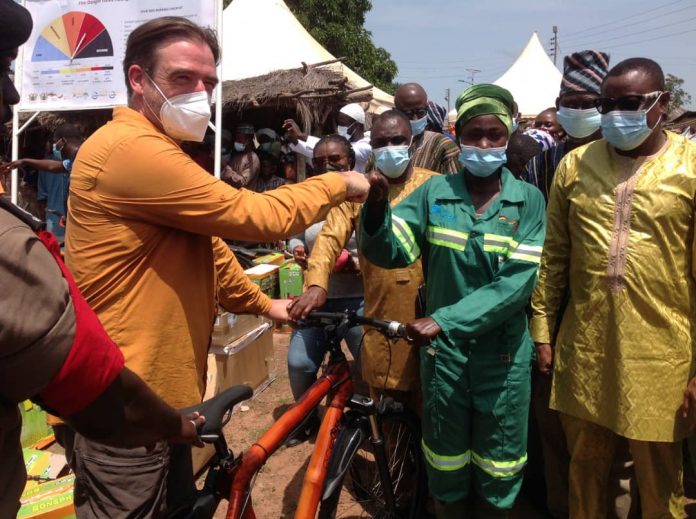 The Minister of Lands and Natural Resources, Hon Samuel Abu Jinapor together with the Ambassador of the Federal Republic of Germany H.E Daniel Krull have on 8th October, 2021, handed over several
equipment to Community Fire Volunteers in six Communities in the Savannah Region.

An event which came off at Achubunyor in the West Gonja Municipality of the Savanna Region, saw community members, Officers of the District Assembly, the Forestry Commission in the Region, Technical
Directors from the Ministry of Lands, representatives of the implementation organisations and the leadership of the Busunu Traditional Area attending.

The presentation of equipment and empowerment of the Fire Volunteer Groups in the six
communities form part of the four-year project “Forest Landscape Restoration through a Sustainable
Wood Energy Value Chain” funded by the German Federal Ministry for Environment (BMU) and
implemented by Deutsche Gesellschaft für Internationale Zusammenarbeit (GIZ) GmbH and in
partnership with the Government of Ghana.

Each community received sets of the following
equipments that included wellington boots, tricycles, fire beaters, uniforms, bamboo bicycles, whistles and others with an overall value of around GHS 450,000.

The project which was launched in early 2019 aims at contributing to the implementation of Ghana’s
National Climate Policy. Already the project has resulted in the establishment of 150 hectares of
woodlot plantation in the Savanna Region while 500 hectares of land has been put under an on-going
restoration intervention, with 150 farmers benefiting through agro-forestry schemes.

Additionally, the project has also undertaken similar activities in the Kintampo and Atebubu areas with 200 hectares of land undergoing restoration and 150 hectares of land planted as woodlots to provide feed stock for charcoal production.

More than 700,000 seedlings have been planted in the last months and more than 2000 persons, mainly women, have been engaged.

Giving his keynote address, the Minister of Lands and Natural Resources Hon Samuel Abu Jinapor emphasised the importance of restoring Ghana’s forest ecosystems, particularly the lost vegetation of Savanna Region, stressing it is key for our survival and for
climate resilience in the face of increasing temperatures and erratic rainfall patterns.

He reiterated the commitment of government of Ghana through several initiatives like the Green Ghana, CREMAs and clamp down on illegal mining as just a few of the numerous being implemented to address deforestation and forest degradation.

Hon Jinapor further reiterated the commitment of the government to partner with like-minded development partners like the German Government and other diplomatic missions, the private sector, NGOs, Youth and Women’s groups to build and restore the lost green heritage of Ghana.

He charged the volunteers and the communities, which also happen to be in his constituency to work hard to reduce the risk of bush fires and make these investments benefit their environment for guarantee sustainable livelihoods for all.

The German Ambassador on his part, highlighted the good cooperation between Ghana and Germany and the joint target to reduce emissions from deforestation and forest degradation as well as to support the approach of Forest and Landscape Restoration “FLR” as part of the Bonn Challenge where Ghana committed to restore 2 Million hectares until 2030.

The Sustainable Wood Fuel and Forest Landscape Restoration Project is in partnership with Ghana’s Ministry of Lands and Natural Resources, the Ministry of Energy, and other partner institutions in Ghana is currently training 170 Fire Volunteers in 12 Communities with support of the Ghana National Fire Service, the Forest Research Institute (FORIG) and the Kwame Nkrumah University of Science and Technology (KNUST).