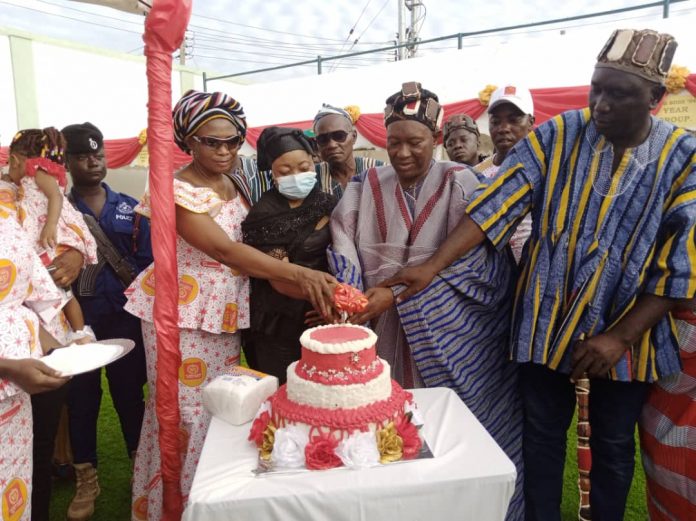 The Paramount Chief of the Bole Traditional Area Bolewura Sarfo Kutuge Feso (I) has said that the establishment of the prestigious Wuripe and Sons Royal Lodge in Bole has not only raised the image of Bole in the eyes of the international world but has created employment for the youth, provided entertainment and has hosted very important conferences across the Savannah Region.

The Bolewura made these comments in a speech read on his behalf by a sub- Chief of Bole, Tingawura Sampson Seidu Abudu at a mini durbar of the 1st Anniversary of the Wuripe and Sons Royal Lodge popularly called ‘Bole Dubai’ on Saturday 25th September, 2021.

Bolewura Kutuge Feso (I) commmended the owner of the hotel stating that; “It is my pleasure to commend Mr Adams Mumuni the Chief Executive Officer and owner of Wuripe Royal Lodge for choosing Bole first and I must say you are a person, whom the Palace of Bolewura admires most for your achievements and noble qualities.

“You have shown a great courage in promoting the Gonja traditions and culture by naming most of the rooms with local Gonja communities names across Gonjaland You are indeed a hero”.

“Wuripe and Sons Royal Lodge is the only three-star luxury hotel in the city of Bole, offering the largest meeting facilities. The hotel has the largest room size in Savannah, with interiors designed to reflect the warmth of the Ghanaian people”. Bolewura said.

In appreciation of the investment of the owner of Wuripe and Sons Royal Lodge, Bolewura Sarfo Kutuge Feso (I) offered him 20 acres of land to establish an extra modern hospital in Bole to cater for the needs of the people. The said land is located 5km from Bole township along the Bole to Techiman road.
At the Durbar, the Savanah regional Minister Hon Muhazu Saeed Jibril who was represented by the District Chief Executive (DCE) nominee for Bole Madam Veronica Alele Heming said the Regional minister has promised to tarred the road that leads Wuripe and Sons Royal lodge.

She said the Regional minister has planned to make Wuripe and Sons Royal lodge a tourist destination in the Bole District.

Madam Veronica Alele Heming who also represented the Hon Minister for Lands and Natural Resources Hon Abu Jinapor has also asked the management of Wuripe and Sons Royal Lodge to always approach him for any support they need.

Madam Veronica again said that Hon Abu Jinapor said his doors are opened at all times that there is a problem and that management of the Hotel should not hesitate to approach him.

Madam Alele also said that, Hon Jinapor told him to thank the Wuripe and Sons Royal Lodge for creating employment for the people of Bole and Savanah Region.

The Deputy Communications officer of the National Democratic Congress (NDC) Mr R.A Jalil who represented the Member of Parliament (MP) for the Bole-Bamboi constituency Alhaji Yussif Sulemana said the NDC has patronised and will continue to do all their workshops and other activities at Wuripe and Sons Royal lodge.

Mr Jalil said the MP attended an equally important program at the Volta Region which he has been delegated to represent him at the anniversary.

He disclosed that the 2020 running mate for the NDC Professor Jane Naana Opoku Agyemang lodged at Wuripe and Sons Royal lodge when she came to the Bole-Bamboi Constituency for their party’s activities.

RA Jalil commended the Paramount Chief of the Bole Traditional Area Bolewura Sarfo Kutuge Feso (I) and sub Chiefs, the DCE nominee for Bole Madam Veronica Alele Heming and other individuals for their great support for the prestigious Wuripe and Sons Royal Lodge in Bole.

He said; “They took this bold decision to put up this facility after coming home on several occasion and saw the need to put a beautiful hotel here in Bole to be holding visitors and to create a favorable environment and venue for entertainment and other social gatherings”.

“Even though the Wuripe family is the one who put up the hotel. It belongs to everyone in Gonjaland and for that matter Savanah Region as a whole therefore we appeal that let us protect it, let us patronise it and also preserve it so that the next generation can meet it;” Mr Dinona said.