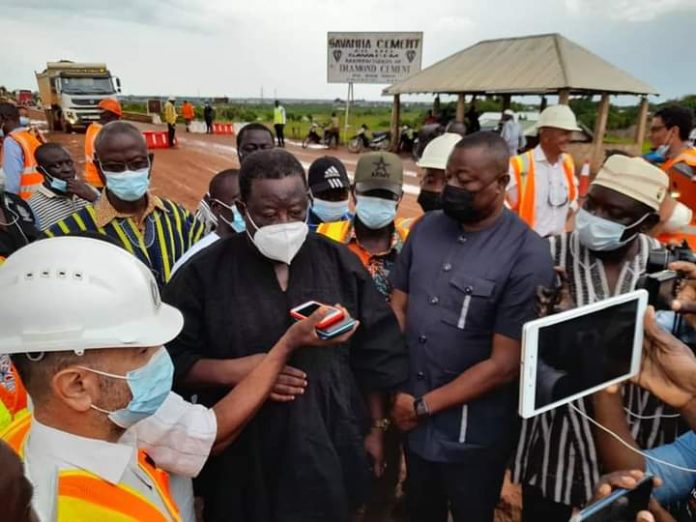 The Minister for Roads and Highways Hon. Kwasi Amoako-Atta has directed the suspension of the collection of tolls at the Buipe toll booth for the next four weeks.

Hon Amoako- Atta gave the directive after he paid a visit to Buipe in the Central Gonja District of the Savanna Region to inspect the progress of work on the approaches to the Buipe bridge on 14th September, 2021. The Minister’s directive of closing the Buipe toll booth takes effect from 6:00 am September 15 2021.

Speaking to the media the Hon Amoako- Atta said the operation of the toll booth is possessing an inconvenience to road users as a result of the works, adding that the closure will enable the contractor to complete the assignment on schedule.

To buttress the suspension, a statement dates 14th December, 2021 and signed by Acting Chief of the Ministry of Roads and Highways says; “The Minister for Roads and Highways has ordered the suspension of the collection of tolls at the Buipe toll booth in the Central Gonja District of the Savannah Region. The suspension tales effect from.6:am, Wednesday 15th September, 2021. The suspension is to ease traffic flow and mitigate discomfort to the travelling public whist the Ghana Highways Authority carries out its periodic maintenance repair works on the approaches to the bridge and the toll booth area”.

The maintenence of the Buipe Bridge is expected to be completed in the next 4 weeks. The Minister thanked the contractor and also expressed his satisfaction at the rate at which work is progressing on the Buipe bridge and assured them of government’s support anytime since the bridge is one of the major bridges in the country that links the Northern part of Ghana to the South.

It will be recalled that some portions of the bridge was damaged endangering the lives of passengers with a call on the government by the
member of Parliament for the Yapei-Kusawgu constituency, Hon. John Abdulai Jinapor calling on the government to fix the dilapidated portion of the Bridge to salvage the stress travellers endure.

The contractor working on the bridge, QGMI construction firm assured the minister of completing the project in the stipulated 4week period.

Mr Roberto Viviano, head of the construction unit of the bridge in an interview assured the minister of quality work which will soon be completed and handed over within the time given.