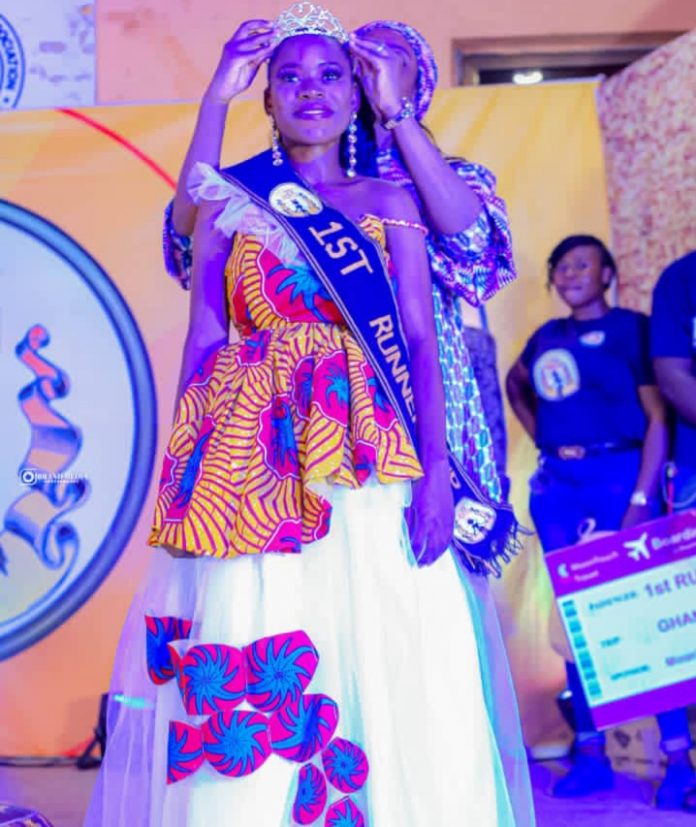 The Savannah Region Representative of the Queen of the North NTV reality show Miss Seidu Sadia has won the 1st runner up prize after a colourful grand finale.

The ten-week program which ended on 28th August, 2021, featured 13 contestants from the five Regions of the Northern Ghana with five at the grand finale.

The finalists were from the Upper West region, Upper east region, the Savannah Region and two from Northern region.

At the grand finale, the Savannah regional representative went home with a package of a travel to Dubai and support for a life changing project.

Miss Sadia will on December enjoy an all expenses paid trip to Nairobi and Dubai, sponsored by Moontouch Travel Limited and a project to execute.

Meanwhile on her arrival to her hometown of Bole Miss Seidu Sadia and her team paid a courtesy call on the Member of Parliament (MP) for Bole- Bamboi constituency, Hon Alhaji Yusif Sulemana at his residence. Queen Sadia and her team presented the dummy boarding pass to her winning price to the MP after recounting how he has helped them in various ways right from the beginning of the 13 weeks long event.

The MP on his part said he was over overjoyed that Sadia’s effort has paid off and that she has not only made her family proud but the whole of the Bole- Bamboi constituency and Savanna Region.

The MP has undertaken to assist the team to come out with a sustainable project she would be pursuing as part of her victory package that would stand the test of time. The MP also pledged to connect Queen Sadia to his international contacts once she is due for her trip to Kenya and Dubai as part of her price.

The MP supported the team yet again with a refreshment amount of Ghc500.

Miss Seidu Sadia who was eloquent, vocal and her presentations and narrated meaningfully, the cultural values of yhe Savannah Region, its tourist sites, some possible solutions to outmoded cultural practices and so on, visited Bole based Nkilgi Fm to thank the management and staff of the Radio station for standing by her from day till the end of the programme.

“We started this competition tyree months ago and Nkilgi Fm has supported me tremendously and so I wish to thank the Manager of Nkilgi fm and his staff for all the support”; she said.

The Queen of the North TV Reality Show on NTV is a reality television show which seeks to showcase the rich cultural heritage of the five northern regions of Ghana and also seeks to market the numerous and untapped tourist sites and tourism potentials in the 5 northern regions as well as promote the rich cultural heritage of the north in terms of their History, Food, Music, Dance, Smocks, Festivals, Livelihood amongst others.