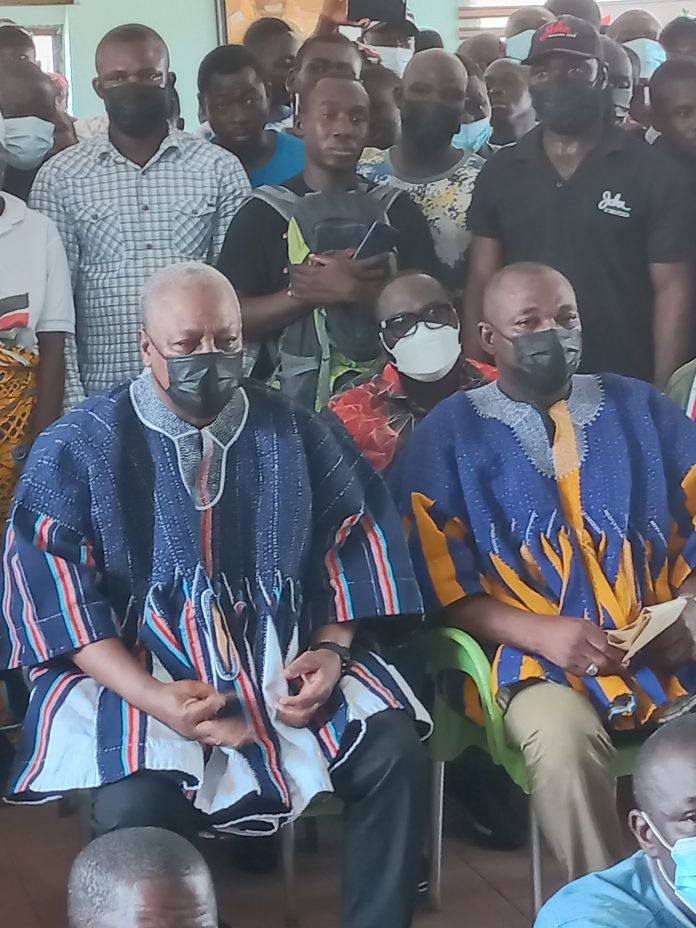 The lost of the Damongo seat in the 2020 election by the National Democratic Congress (NDC) candidate Mr Adam Mutawakilu Adam to the New Patriotic Party (NPP) Mr Samuel Abu Jinapor is being blamed on the intense desire for money by the people of the constituency.

This was made known to former President John Dramani Mahama when he visited the Savannah region on Friday 20th August, 2021 for a “Thank You” tour.

After Mr Mahama’s first stop at Larabanga where he made a courtesy call on the newly installed Chief Imam of the community, Alhaji Mahama Mumuni Zankawah, he proceeded to pay a courtesy call on the King and Overlord of Gonja, Yagbonwura Tuntumba Boresa (I) and Members of the Savannah Regional House of Chiefs.

While addressing the Yagbonwura and his Chiefs in the Gonja language, former President Mahama thanked all those who voted and those who did not vote for him.

Former President John Dramani Mahama said the NDC performed creditably in the 2020 election in the Savannah Region and that the NDC lost three seats out of seven. He said the party could have performed better , and in an attempt to proffer reasons for the loss of the Damongo seat, Mr Mahama mentioned lack of unity but when he was about to give another reason he was interjected by the many chanting NDC youth present who kept saying “greed- greed- greed” until Mr Mahama agreed with them and also said “greed” before he was allowed to proceed with his speech to the Yagbonwura and members of the Savannah Region Housenof Chiefs.

The former President also met with former and current Members of Parliament (MP’s), Party executives, former appointees, cadres and so on

At the meeting a Youth Activist of NDC Baba Hamidu MacLean told former President John Dramani Mahama that executives of the NDC are not telling him the realities on the ground.

The NDC Youth Activist said”Mr President we always feel proud to associate ourselves with you because you were born in Damongo here as we were all born here to”.

He added that; “We would be bold enough to let you know that some of things that some of the big men come to tell you are not always the realities on the ground”.

The Chairman of the NDC Council of Elders in the Savannah Region Balewura Alhaji Seidu Iddi said NDC has never lost any seat until the 2020 elections.

He attributed the situation to lack of unity and non acceptance of some parliamentary candidates.

Chief Iddi said the 2020 election performance of the NDC in the Savannah Region should teach members a lesson and that the party must support its parliamentary candidates.

The lost of the Damongo Parliamentary seat was a big concern to the NDC.

This is in contrast with the Parliamentary elections in the constituency in which the NPP candidate Mr Samuel Abu Jinapor polled 15,989 (54.08%) to snatch the seat from the NDC candidate and former MP Mr Adam Mutawakilu who polled 13,279 (44.92%) votes.