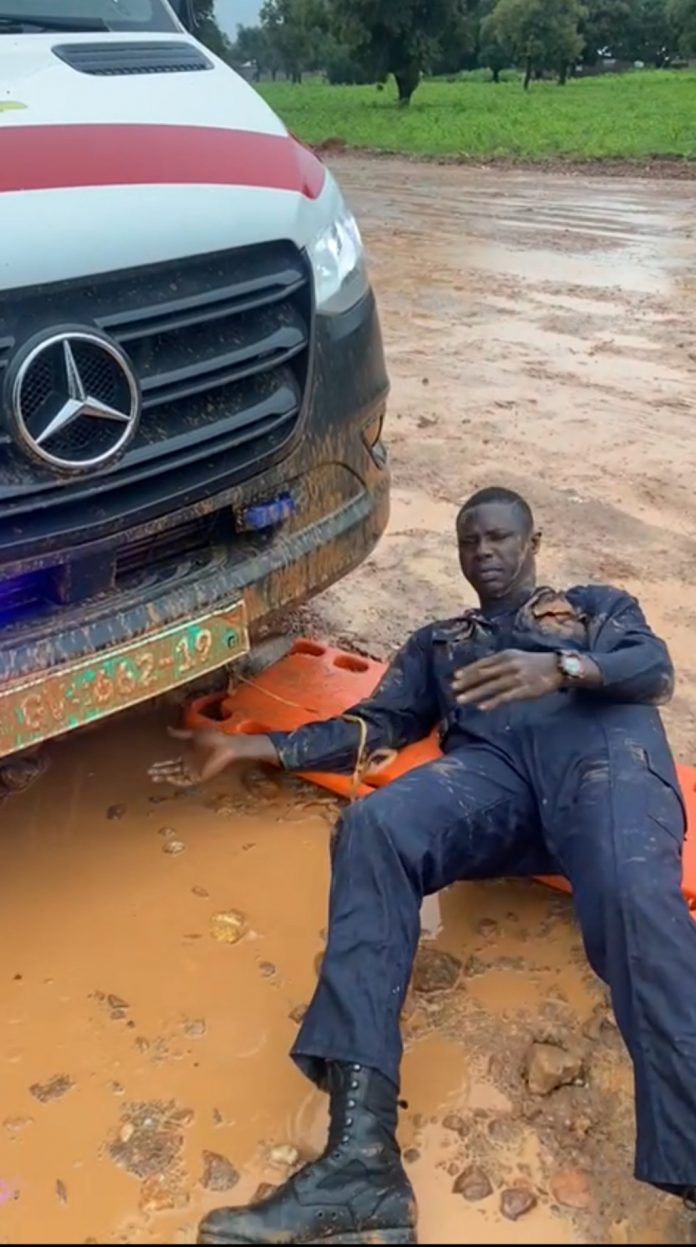 An Emergency Medical Technician (EMT) Driver of the Ghana Ambulance Service stationed at Gwollu in the Upper West Region Abubakari Mubarik is receiving praises for his dedication and hard work.

The Ambulance Technician Mubarik was transporting a patient who was on blood transfusion to the Wa regional hospital on Monday 23rd August, 2021 and the vehicle developed a fault in the middle of the journey.

The Gwollu-Han road can be described as one of the most deplorable in the country.

Amidst the heavy downpour and muddy road, EMT Mubarak in his quest to save the womans life, stepped out of the vehicle to help fix the fault at hand. He eventually succeeded in fixing the vehicle half way and continued the journey to the Wa regional hospital.

The woman is alive and responding to treatment at the aforementioned facility.

While Mubark Abubakari was struggling to fix the vehicle a witness took pictures and videos of the situation and posted on social media.

Bole based Nkilgi fm got in touch with EMT Abukari Mohammed who hails from Bole in the Savannah Region and he said; “they where transporting a patient with internal bleeding and on blood transfusion from Gwollu hospital to Wa regional hospital but due to the bad nature of the Gwollu to Han road they got stucked with big trucks in the middle of the road.

He said the down plate of the Ambulance that protect the oil base almost got removed and it was obstructing the movement of the ambulance slowing it and so they could not even speed up 20 kilometers per hour.

He added;
“So we stopped in the middle of rain and I was able to half way fix it (but it was left hanging) because we couldn’t spend more time to work on it because the patient was loosing more blood internally”.

“Thanks to the most high after half way fixing the problem, we got to Wa regional hospital in two hours time with the patient alive”.

Mubarik said he has read many Facebook posts with photos and videos about the situation but he did not request for that and was not working for fame but was just doing his work like many other EMT’s across the country.

He said the Chief Executive Officer of the Ghana Ambulance Service Professor Ahmed Nuhu Zakariah has always urged all personnel to be dedicated to their duties hence he cultivating the habit of working hard anytime he is on duty.

Many have taken to social media to hail the EMT Driver appreciating the extent to which some EMT personnel sacrifice to protect lives.