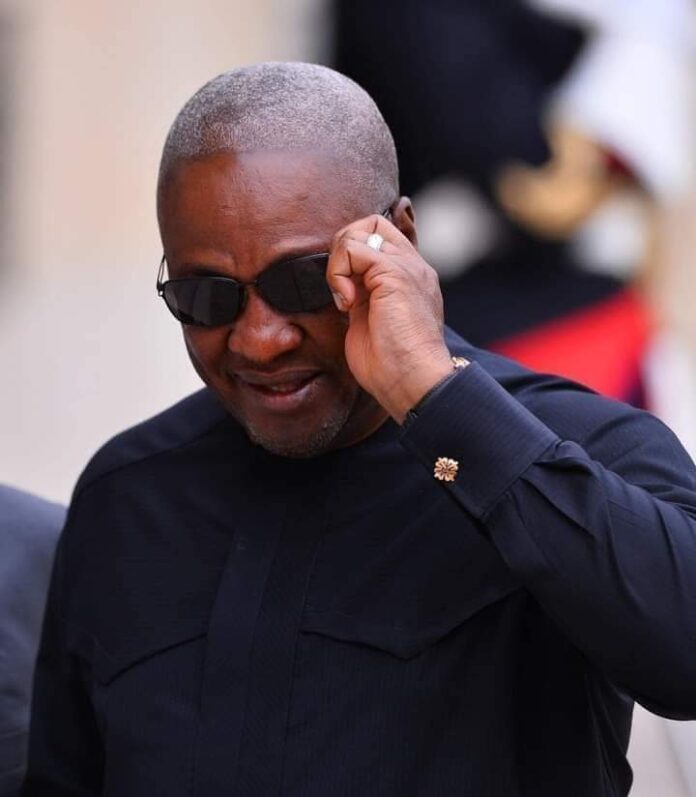 The NDC as the biggest opposition party in Ghana has emanated from the sacrifices and toils of the cadres and the ordinary Ghanaian on the street.

Leadership and the foundation of the party was built around a certain culture dispensation exposition of very key elements of persons who play and stimulate the party’s affairs through their individual political image.

It should be made categorically clear to supporters of this great party that wheatear one decides to disagree or no matter the level of hatred or dislike one exhibit towards the person of John Dramani Mahama , he still remains the only political enigma and dispensatioal leader in the National Democratic Party who is endowed with great potential of returning the NDC back in to power despite the blouf of the New Patriotic Party to break the eight concept.

John Dramani Mahama has become an exponential leader with an endless well of wisdom and political experience in this particular political dispensation of our town.

Being that generational leader by virtue of his long exposure in the field of politics, John Dramani Mahama still remains the only golden card come 2024 in the hand of the NDC as a political party.

His pedigree is unmatched.

If it wasn’t through the machinations and manipulations by the electoral commission of Ghana to favour the NPP’s Presidential candidate Nana Addo Dankwah Akuffo Addo, His Excellency John Dramani Mahama would have been the President elect in the 2020 Presidential elections, however we are of the optimum believe that what happened in the immediate past Presidential elections to the disadvantage of the NDC would never be allowed to happen again.

I have heard some feisty critics of the former President within the NDC making very ridiculous arguments in their attempt to raise negative public sentiments of disaffection against him always falling flat on the ground without even causing a scratch on him.

One thing that critics of the former President fails to recognise is that, in this current dispensation of politics in Ghana, John Dramani Mahama has become the soul of the NDC and fighting him means fighting the success of the NDC as a party,.

Therefore it would be politically unwise and suicidal to any individual in the NDC to try to contest or contest former President John Dramani Mahama in the upcoming party primaries.

Contesting the former President in the party’s primaries would only bring the anger of the grassroots against such group of individuals which would go a long way to affect the political careers of such groups of people.

In addition anybody contesting against the former President is simply throwing his/her resources away.

Anyway the party would need such resources to compaign for the former President in the 2024 general elections.

It very much advisable for interested persons who are willing to contest the former President in the incoming party primaries to hold back their fire by wholeheartedly embracing the John Dramani Mahama candidature in the spirit and interest of the party by allowing him to lead unopposed.

There won’t be any need fighting a battle that you can never win but by supporting the side that brings victory, is a sign of brotherhood but not defeat on the side of the one submitting in the spirit of togetherness.

It is apparently obvious that if you cannot beat your opponent in the game of contest, you join him to succeed, this is what is expected by all the ranks and file of NDC as a party.

Just as was done for the founder and father of the NDC, Flt Lt Jerry John Rawlings who also doubles as the founder of the democracy we are enjoying today under this current fourth republican dispensation, who led unopposed for the NDC as the presidential candidate and flag bearer in 1992 and 1997, it is my hope that such courtesies would be extended to his natural successor in the person of former President John Dramani Mahama to also go unopposed.

The NDC and it’s grassroots supporters must not allow certain greedy and self-seeking selfish individuals who shall hide under the guise of democracy to disrespect the former President by contesting against him and seeking to create an impression that the party’s ranks and file has lost confidence in his leadership.

The party should never allow any sponsored political poodle come muddy the affairs of the NDC in the incoming party primaries.

Saying this does not suggest in anyway that former President John Dramani Mahama is afraid of contest,.

It should be noted that as an old political warrior, John Dramani Mahama can not and would never be afraid of competition in any way or form, of course history would remind as that he has always been in the war front since 1996 when he was first elected as a member of parliament for the Bole Bamboi constituency.

However, as an act of love and in the spirit of respect and friendship, it won’t be a misplaced idea or priority to allow him lead unopposed this time around in next years party’s primaries.

Even though, as members of the great NDC, some of us have been aware of the political mules supplanted by the ruling NPP to cause confusion and division against the person of the former President John Dramani Mahama for their own political advantage,it is still very imperative that such parasitic ticks and mules are still not been routed out of their positions of destruction that is why we still witness rancour and dishonesty even among the minority group of the parliament of Ghana.

I wonder why some political creatures would be very happy and comfortable to sellout their birthright for a pantry amount of gifts in monetary value and contracts to betray their own God given right to these resources if they had agreed to selflessly work hard for their own party to win political power.

Unfortunately such unsuspected diabolical political elements still find themselves in very high positions in the party.

In my own opinion every detected parasite in the party who might have contributed to the defeat of the party in the 2016 and the stolen supreme court verdict in the 2020 election petition case should be suspended in the interest of the party and there must not be selective application of justice as the says goes what is good for the gander must be good for the goose.

Ironically, the nets of the law was only applied to the smaller fishes such as it was exhibited in the case of Alotey Jacobs, Stephen Atubiga and our former dep. General Secretary Mr. Kweku.

In my view ,the laws of the party left out the bigger fishes whose utterances, actions and inactions left the NDC and it’s 2020 presidential candidate in the dilemma of votes reduction in certain parts of the country which where primarily claimed to be strongholds of the NDC especially, Volta region, Oti region, Savannah region, North East region and Northern region respectively.

2024 therefore, offers the NDC a better chance of recapturing power and a time for reformation on the part of weeding out all the unwanted political profiteering sycophants who’s only aim is to destroy the electoral fortunes of the party using their positions and following as their arsenals in their offensive as an advantage against the party and it’s natural successor to whom we all must rally around.

These groups of political business tycoons has managed to capture the backing of some prominent individuals as a bargaining chip to create confusion and division within the party to conveniently satisfy the interest of the government of the NPP through their influences. I call them political guinea pigs.

This uncultured behaviour of these kinds of individuals if not identified and uprooted properly stands a chance of still muddying the victory of the NDC come 2024. The NPP then in opposition 2016 by then have to suspend it’s National chairman , vice chairman and general secretary for working against the fortunes of their flag bearer the current president of Ghana, yet it never did affected their chances of winning the elections.

Therefore it is necessary evil to take off certain political giants in the Party who are working against the interest and chances of the NDC in order to facilitate a smooth victory for the party come 2024 irrespective of the consequences.

John Dramani Mahama would need every heart, mind, hand, mouth and voice of the NDC to deliver victory for the people of Ghana Insha Allahu come 2024 but we can enhance it if he is allowed to lead the NDC in to the battlefield come 2024 unopposed.