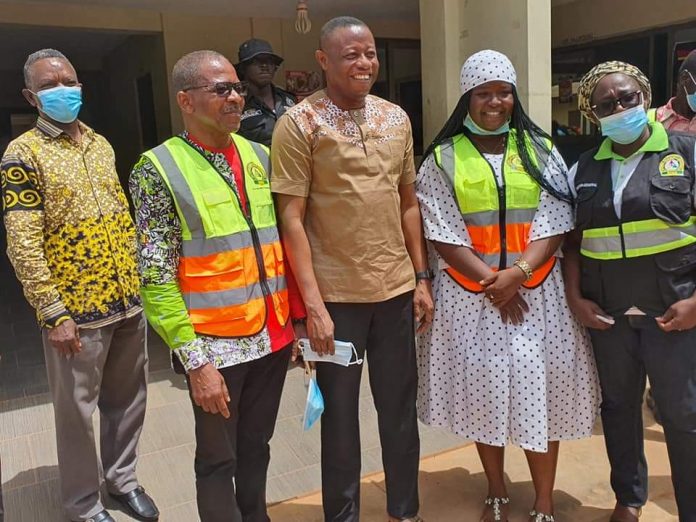 The Savannah Regional Minister, Mr Saeed Muhazu Jibril has voiced out his frustrations on how minors are allowed by tricycle owners to use them for commercial purposes in the Savannah Region and disclosed he has since charged, the Police MTTD to implement operations to stop minors from riding motorbikes and tricycles in the region and riders ensure the use of crash helmets and their mirrors intact while riding to avoid unnecessary accidents.

The Minister made these comments on 8th July, 2021 when he received officials of the National Road Safety Authority (NRSA) led by the Director-General Mrs May Obiri-Yeboah at his office in the Savannah Regional Coordinating Council.

The Regional Minister in his remarks touched on key issues relating the establishment of the National Road Safety Authority in the region and indicated that, the region as new as it is, office accommodation and accommodation in general for officers are a big challenge and that, plans are far advanced to get a befitting office for its activities.

He praised officers who are currently in the Savannah Region for their good work especially, their constant engagements with stakeholders educating them on issues with road safety and implementing measures to ensure safety on road users and also how they educate the public especially through radio stations and lorry parks.

According to Mr Jibril, it has helped a bit to reduce road accidents in the especially in the Savannah Regional capital, Damongo.

The Director-General of the NRSA Mrs May Obiri-Yeboah thanked the Regional Minister for his warm reception and that she is impressed.

According to her, the visit was to first of all congratulate the Regional Minister for his appointment and secondly to role out the activities of national road safety authority in the region to help reduce road carnage.

According to her, constant engagements with stakeholders especially GPRTU, other unions within its umbrella, road users will be ensured, radio discussions will be intensified to educate the public on safety use of our roads.