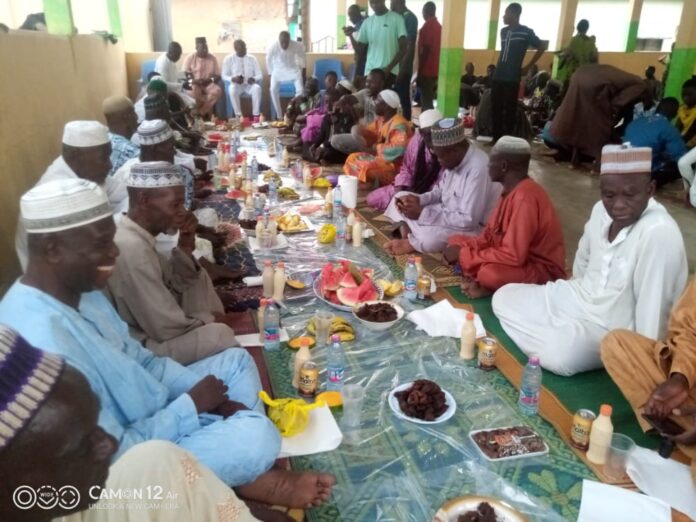 Former President John Dramani Mahama has on 3rd May 2021 organised an Iftar (evening meal to break fast in Ramadan) for the Muslim Community in Bole at the Bole Central Mosque.

The Member of Parliament (MP) for the Bole-Bamboi Constituency Hon Alhaji Yussif Sulemana represented the former President at the event which saw many leaders of the Muslim Community in Bole as well as the National Democratic Congress (NDC) Executives for the the Savannah region and Bole Bamboi Constituency in attendance with variety of food and drinks served.

Speaking to Bole based Nkilgi Fm at the Iftar, the MP Hon Sulemana disclosed that former President John Dramani Mahama made him to organise the Iftar meal for the Muslim Community within Bole town in the month of Ramadan.

The MP said in 2019 an Iftar was organised but it could not be possible last year 2020 because of the COVID-19 pandemic.

He said the Iftar will be a continuous event in every year in the month of Ramadan.

The MP further disclosed that, former president John Dramani Mahama has also given 20 bags of rice to share to some prominent people on Bole and he hopes for more of such support from individuals.

The Savannah Regional Chairman of NDC Alhaji Moro Seidu thanked the Bole Chief Imam for organising the Muslim community for the Iftar and added that togetherness is the best way of solving disputes. He said coming together to breakfast or take iftar is one of the many things that attract reward from Allah.

Alhaji Shaibu Timtey on behalf of the Chief Iman of Bole offered special prayers for the organisers of the Iftar. He quoted some verses from the Quran which says “givers do not lack”. He called for God’s blessing for former President John Dramani Mahama, the MP Alhaji Yussif Sulemanan and the Savannah Regional Chairman of the NDC ndc Alhjai Moro for their efforts in supporting Islam.