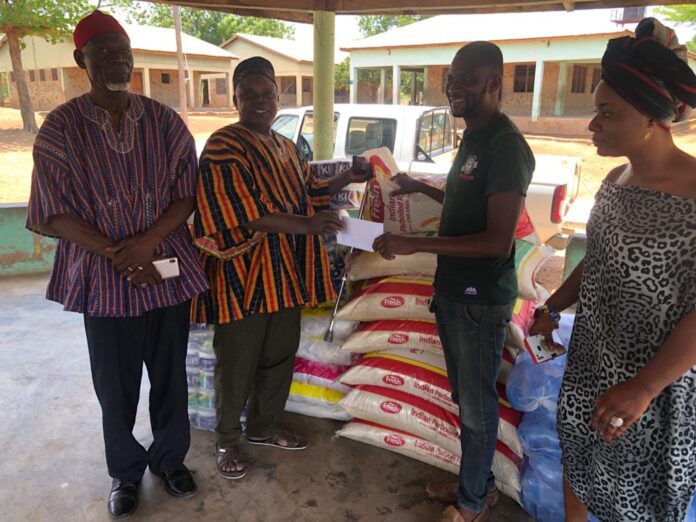 The Paramount Chief of the Buipe Traditional area of Gonja, Buipewura Abdulai Jinapor (II) has donated food items, toiletries and an undisclosed amount to both the Redemption Children’s Home in Damongo and the Sawla Orphanage all in the Savannah Region.

The donations which was done on behalf of Buipewura Jinapor (II) by a prominent Chief of the Wasipe Traditional area of Gonja
Gbenapewura Adam Mahama Sakan and the Chief linguist of the Yagbonwura Alhaji Afuli Losina at Damongo brought happiness onto the faces of the inmates of the homes.

Speaking at the short ceremony in Damongo, Gbinapewura Adam Mahama Sakan said the donated items made up of bags of rice, gallons of oil, water, toilet rolls and an undisclosed amount of money is a contribution from a group of people who decided to contribute their little cash under the auspices of Buipewura Jinapor (II) who is also the lead contributor for the programme.

Gbenapewura Mahama also added that the the donation to the orphanages and the vulnerable in the society led by the Buipewura would be done yearly and therefore used the opportunity on behalf of Buipewura Jinapor (II) to thank everyone who supported in making the program a success.

The Linguist of the Yagbonwura, Alhaji Afuli Losina on behalf of the King and Overlord of Gonja Yagbonwura Tuntumba Boresa (I) praised Buipewura Jinapor (II) and all who contributed to put smiles back on the faces of orphans in the society.

He said God will reward their efforts and also bless them to be able to do more for the poor in the society since it is through giving that we receive.

Pastor Saaka Lermu Abraham, the manager of the Redemption Children’s Home in Damongo thanked the Buipewura and the team for coming to their aid especially at this time of the year.

Pastor Abraham added that it is not easy for donations to be made to the home especially within the Savannah Region and therefore extended his hand of appreciation to the donors.

He said, like Oliver Twist, the home will always welcome more support from any quarters since that will ease a lot of burden on the management of the home.