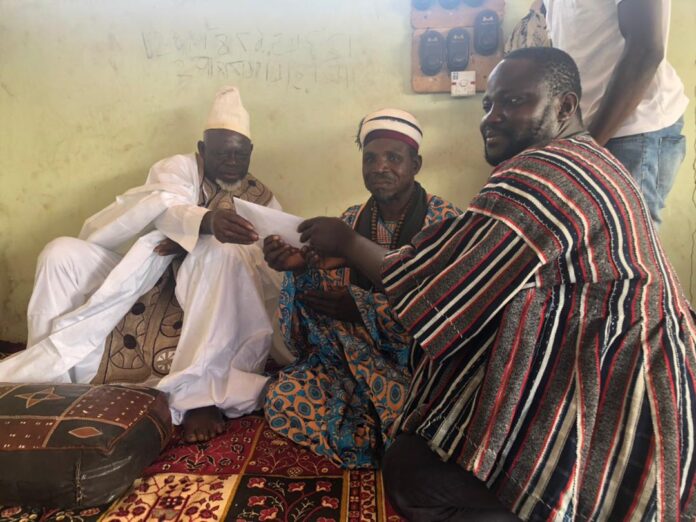 The Paramount Chief of the Buipe Traditional area of Gonja, Buipewura Abdulai Jinapor (II) has on Friday April 16, 2021 made a cash donation of one thousand Ghana cedis (Gh¢ 1000 ) each to Wipe – Away Foundation, a charity organisation and Bole based Nkilgi Fm. The donation was done on behalf of the Buipewura by Busunuwura Jonokpwu Monasa at a short ceremony at the Busunuwura’s palace in Busunu in the West Gonja Municipality of the Savannah Region.

The Busunuwura in his brief remarks said Buipewura has taken keen interest in the activities of Wipe-Away Foundation and that the assistance will help mitigate the organisation’s stride to have a better society devoid of destitutes.

He said “we want to thank you and your donors, most of whom are also the vulnerable for what you are doing for our people “

Speaking after receiving the cash donation, Agurowura Musah Abdul- Fatawu, who is the foundation’s Operations manager of Wipe-Away Foundation expressed his gratitude to Buipewura Jinapor (II) for his benevolence to the foundation to assist them in ensuring that their goal to eradicate poverty, hunger and chronic deseases in our society is achieved.

He further revealed that, the cash donation of one thousand Ghana cedis (Gh¢ 1,000) is the highest of it’s kind from any paramount chief this year, a gesture he said, words can not summarise.

The PRO of Wipe-Away Foundation Osman Abubakari-Sadiq in a brief remark said the donation came at a time the foundation carved out a health policy scheme known as SoHat which premise is to pay hospital bills of their clients who subscribe to the health scheme.

The Secretary of Bole based Nkilgi Fm Madam Adama Alhassan Nana on behalf of management of the Radio station extended their profound gratitude to the Paramount Chief of the Buipe Traditional Area Buipewura Abdulai Jinapor (II) and his team that managed the “Jinapor II Easter Feed the Orphanage, Widows, Sick and Aged” for donating the amount of one thousand Ghana cedis (Gh¢ 1,000) to the baby who was abandoned in a public toilet but rescued and now being given temporal care giving by her.

It would be recalled that an unknown woman in the early morning of 21st July, 2020 went to a public toilet near the Methodist Primary School at Mempeasem in Bole and gave birth to a baby boy inside the toilet after which she wrapped the baby in a piece of cloth and a polythene bag and dumped him into the septic tank of the toilet. The baby was later rescued by good samaritans including a worker of Nkilgi Fm.

Madam Alhassan Adama Nana said; “I believe the story of this baby touched Jirah Buipewura hence the donation which will make it possible for us to continue giving proper care for the baby until the social welfare department take over that responsibility and subsequently put him in an orphanage”.

On his part, the Public Relations Officer (PRO) of Buipewura Jinapor (II), Mr Prince Abdul Samed Gbanso, said the donation was borne out of a conversation and fundraising on a Whatsapp platform named “Jinapor Philosopher Chief”.

He noted that, “Whatsapp platforms are not for only debates but avenues to mobilize and make a change in a course”.