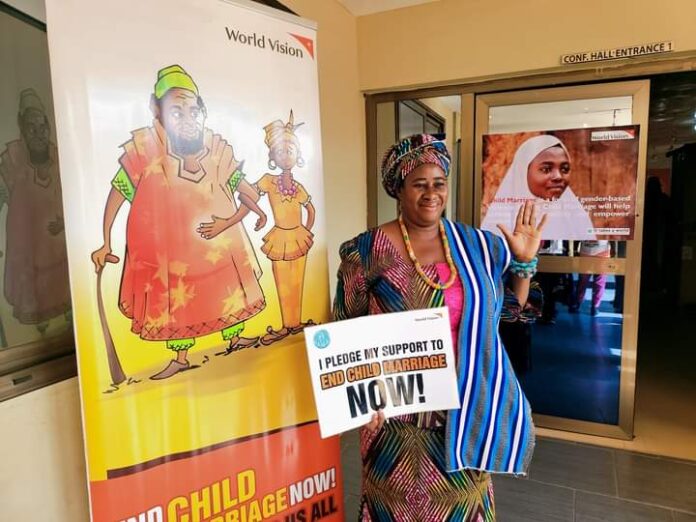 A Queen mother in the Buipe traditional area of Gonja, Bridgewuriche Barchisu Mankir has identified teenage pregnancy and child marriage as the lead cause of poverty in the Savannah Region.

She made the call on the sidelines of a seminar organised by the Savannah Women Integrated Development Agency (SWIDA-GH), a women empowerment an NGO in collaboration with the World Vision International at Damongo on 13th April, 2021 to dialogue and plan for ending child marriage now in the Savannah Region.

The seminar was attended by over 100 participants made up of traditional rulers, religious groups, women leaders, youth groups and relevant government departments with speeches delivered by the Regional Operations Manager, World Vision, and the Campaigns Co-ordinator, World Vision emphasising on the need to immediately end child marriage especially in the Savannah Region.

Bridgewuriche Barchisu Mankir said improper parental control among many other factors are the causes of this teenage pregnancies which ends up pushing a lot of our young girls to go the South for Kayayei and other menial jobs.

The Queen mother said education is not taken seriously here and ends up pushing the young ones into early marriages.

She added that the believe that it is a tradition in our part of the country is never true which should never be encouraged since even our religions must preach against.

Bridgewuriche Barchisu Mankir added that there are women who are of the age marriage but not married yet the young guys prefer to subject the innocent ones into teenage pregnancies instead going in for those ready for marriage and appealed for an end to the menance.

Meanwhile Bonyantowura Koja, who represented the Busunu traditional area at the seminar added his voice by calling on his colleague Chiefs to support the call to end the menace of child marriages and teenage pregnancy.

He said the days Chiefs marry many wives are over and that much emphasis should be placed on setting educational endowment funds to support especially the girl child since poverty is also one of the problems leading to the menance.

Bonyantowura Koja further suggested that by- laws should also be put in place to help in the fight against the menance.

The Youth chief of Damongo, Nyiribiwura Yakubu Jaga Alanchan who was also part of the panel at the seminar suggested that no under age should be betrothed to a chief since that also amounts to early child marriage.