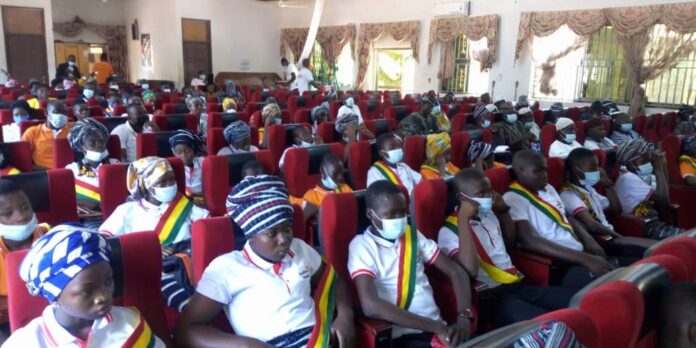 The Savannah Women Integrated Development Agency (SWIDA-GH), a women empowerment non-Governmental Organization (NGO) in collaboration with the World Vision International have organised a one day Savannah Regional seminar on 13th April, 2021 to dialogue and plan for ending child marriage now in the Savannah Regional capital of Damongo.

The seminar was attended by over 100 participants made up of traditional rulers, religious groups, women leaders, youth groups and relevant government departments with speeches delivered by the Regional Operations Manager, World Vision, and the Campaigns Co-ordinator, World Vision emphasising on the need to immediately end child marriage especially in the Savannah Region.

Hajia Alima Sagito-Saeed, the Executive Director of SWIDA-GH, in an interview with the media after the seminar said it is very alarming in Ghana as a country especially in the northern parts how girls below the ages of 18 gets married, increasing the rate of poverty in the areas.

She said World Vision Ghana is poised to work to end the menace by the end of 2021. She said the West Gonja Municipality being an operational area for them, they found it very necessary collaborating with the Municipality to enhance the fight.

Hajia Alima Sagito-Saeed further indicated that 34% of the ladies in the county in one way or the other are forcefully married even below the age of 18.

The West Gonja Municipal Director of Health Services Hajia Fuseina Sulemana and one of the panel members who spoke during the program spoke exclusively to Bole based Nkilgi FM and indicated that parents should not consider the bride prices paid to them but should focus on how to build the future of the children through education.

She added that the number of cases of teenage pregnancies in the region has gone very high with most of the facilities in the municipality recording more cases due to the lock down as a result of the COVID-19 pandemic which bared most of the students from attending schools.

Hajia Fuseina Sulemana therefore used the opportunity to appeal to parents to focus on the education of their female children instead of giving them to men to marry.

A 12 year old participant and a student of Damongo Girls Model school, Miss Naziru Titiaka Mowadatu appealed to parents to help end the menace by enrolling them to attend extra classes and making sure they do not use Mobile phones since that is the main cause of teenage pregnancy and early marriages in the region.

Child and Forced marriage is a social and development issue in Ghana particularly in the Savannah Region. Ghana has signed on to many international treaties and conventions aimed at protecting children, an indication of the government’s commitment to the promotion and protection of the rights of children.

The 1992 Constitution recognises equality of all persons before the law and prohibits discrimination on the grounds of sex, age, religion etc. which reinforce the human rights of women and children.

The government of Ghana has also developed several interventions to support the education of children and policies and laws against early and forced marriage.

It is against this background that the World Vision International Ghana and its partner, the Savannah Women Integrated Development Agency organised the Savannah regional dialogue for over 100 participants to dialogue and plan for ending child marriage now in the region with the theme; ‘Combating Teenage Pregnancy to end child marriage now’.