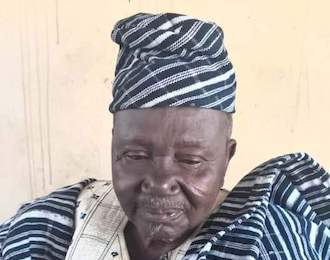 The Kusawgu Skin of Gonja is one of the five divisional skins that ascends the Yagbon Skin of Gonja. The rest are Wasipe, Kpembe, Bole, and Tuluwe.

Known in private life as Assistant Chief Fire Office (ACFO Retired) Alhassan Soale, the nominated Kusawguwura was born in September 1944 at Yapei to Kusawguwura Soale Bunyanso (I) of the Soalepei gate of the Kusawgu Traditional Area. He started his primary Education at Kusawgu primary and proceeded to Salaga L/A Middle School from 1956 to 1959.

He got employed as a messenger at the Information Services Department and later elevated to Assistant store Keeper in 1961.

On 3rd January, 1966, He got enrolled to the fire Service Training school for a 4 weeks Training program but it later turned out to be 9-month training due to the overthrow of President Dr. Kwame Nkrumah Government in February, 1966

The nominated Kusawguwura graduated from the Fire Service Training School in September 1966.

In 1983, due to his hard work and determination he was again promoted to Divisional Officer grade II.

Nominated Kusawguwura Soale Bunyanso (II) was again transferred from Denu to Damongo in 1984 as the District Fire Officer.

He later got transferred to Tumu in the Upper West Region in 1993 and after a year he was brought to Tamale in 1995.

Nominated Kusawguwura Alhassan Soale Bunyanso (II) obtained the status of the Divisional Officer Grade I in 1998 and was again transferred to Damongo as the District fire Officer
At Damongo he was promoted to Assistant Chief Fire Officer and retired in September, 2004 on the same rank.

The nominated Kusawguwura is married with three Children.

“When I joined my ancestors, I will have a good Story to tell. That during my reign as Yapeiwura, Yapei can now boast of portable Drinking Water” June 2019.

1. Through his personal appeal to the President of the Republic, A small Town water system has being constructed at Yapei.

2. Release Land for the Construction of a Fire Station in Yapei

3. Yapei Port Reopened through Public Private Partnership after 47 years of inactivity through his advocacy and call on private investor to take up the facility

4. Continues advocacy for the establishment of 2nd cycle School at Yapei

5. Continues Advocacy for the Split of Central Gonja District into 2 Districts

6. Release Land in Yapei for the Commencement of the Damongo and Tamale Water Projects