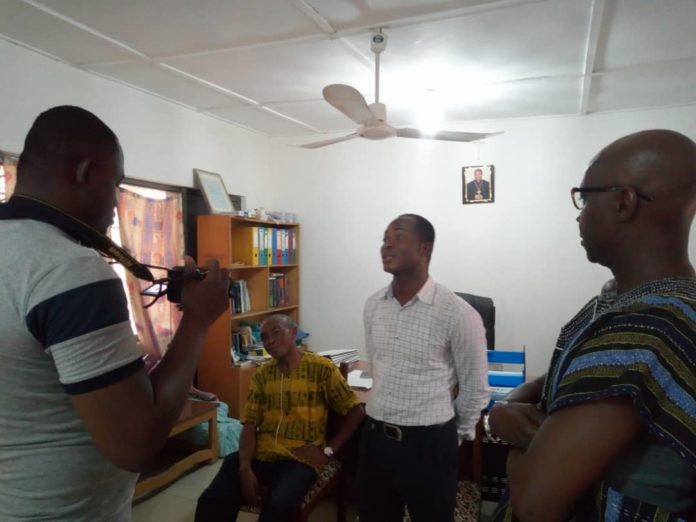 The medical superintendent of the Damongo Catholic Hospital Dr Saadare Anlaagmen has disclosed to the media that the facility is ready to fight the Coronavirus menace that has hit Ghana.

Dr Saadare was speaking after receiving some facemasks, hand gloves and sanitisers from Mr David Tiki Dange, an Independent Parliamentary Candidate for the Damongo Constituency on Thursday 18th March, 2020.

He further said the hospital is doing everything possible by putting out measures to help fight the deadly disease and also protect patients, staff and visitors entering into the facility.

Dr Saadare thanked Mr Tiki for the kind gesture and appealed to other bodies to emulate what he has done by donating to the facility.

He said the Savannah Regional Health Directorate together with the hospital have released some two of their staff including a medical doctor to be trained for onward training of their colleagues in the hospital towards the prevention of the disease and also take care of the victims suspected to be infected .

He explained that some hand gloves, hand sanitisers and face masks have been procured by the hospital alongside the donation from Mr Tiki to help in the prevention process with a ward fully prepared by the hospital to serve as a holding room for victims incase of the hospital recording cases of the virus.
Nkilgi FM can confirm that “Veronica buckets” containing water according as said by Dr Saadare have been placed in various vantage points of the facility with hand sanitisers for the washing of hands by visitors, patients and staff of the hospital.

Meanwhile, Coronavirus cases in Ghana have hit nine. This was disclosed by President Nana Akufo-Addo on Thursday, March 19, 2020.

The President said this during a Presidential Prayer Breakfast Meeting with Christian leaders in Ghana at the Jubilee House.

He said; “…We also learned, sadly on Wednesday, that 3 Ghanaians living abroad had lost their lives as a result. With 9 confirmed cases of infections, we might as well count ourselves lucky as one of the countries least hit by the Coronavirus”.
As of Wednesday, March 18, the cases were seven but the Minister of Information, Kojo Oppong Nkrumah took to social media site, Twitter to explain that the two extra cases were recorded overnight.

Both cases according to the government were imported.

The Ghana Health Service’s website dedicated to updating Ghanaians on COVID-19 cases said the two additional cases involved a 56-year-old Ghanaian who travelled back to Accra from the UK and a 33-year-old who also came in from a conference in UAE.

“On the 18th March, we received another report form NMIMR indicating two (2) more confirmed cases from the Greater Accra Region. Both are imported cases. One is a 56-year-old man, a Ghanaian who travelled back to Accra from a trip to UK about a week ago.

The other is a 33-year-old Ghanaian, who returned to Accra from a conference in UAE. Both cases are receiving treatment in isolation.”

The Ghana Health Service website noted that no death has been recorded yet.