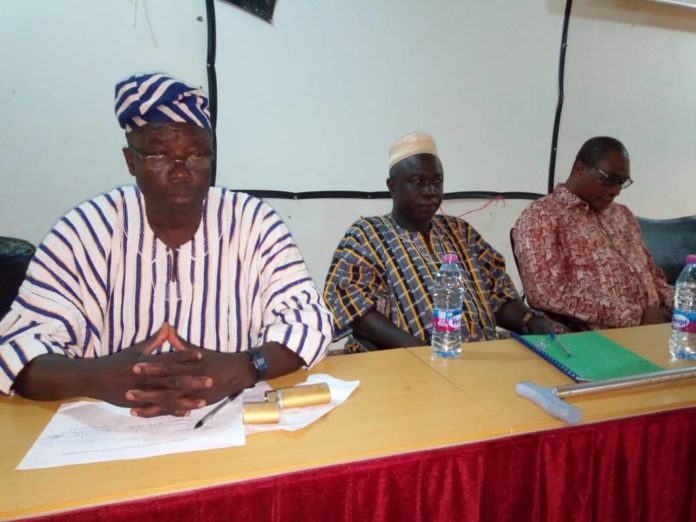 The National Commission For Civic Education (NCCE) has launched the District Level Elections (DLE’s) amendment of article 55 (3) of the 1992 republic constitution that will allow political parties to participate in decentralised local governance on Thursday 10th October, 2019.

Currently political parties are
constitutionally debarred from participating in District Level Elections but the amendment will enable Metropolitan, Municipal, and District Chief Executives (MMDCEs) and membership of MMDA’s as well as sub-district structures to be elected on multiparty basis.

The amendment of Article 55 has been limited to the election of MMDCEs, membership of MMDAs and sub-district structures
such as Unit Committees which is only covered in Clause 3 of Article 55.

He said 40% of votes out of the the total number of voters in the country with 75% of the 40% in  agreement whether political parties should sponsor assembly persons (candidates) on political lines going into elections and also voting to elect MMDCEs on partisan lines.

Alhaji Saani said the election of MMDCEs will lead to development since the issues of party foot soldiers will become a thing of the past since the President will not have a hand in their appointment.

The District Chief Executive (DCE) for West Gonja District Assembly, Hon. Saeed Jibreel who stood in for the Savannah Regional minister addressing participants during the launch said he was impressed about the response and turn out of the people of the West Gonja district for the program.

He went further to say that the pros and cons of electing MMDCEs on partisan basis can not be over emphasised since it will bring participatory democracy, fixed tenure of office, transparency, accountability, inclusiveness, equity and fairness in the system.

He however said the system even though will be very expensive in terms of financial and human resources for the state to bear.

Hon Muhazu also said some pundits believe candidates will owe allegiance to their political parties and paymasters rather than the citizenry with a possibility of a cold blood between opposition MMDCEs and incumbent governments in the implementation of government policies.

He said many others also believe the process of electing MMDCEs  will increase their allegiance  to the electorates and increase their level of transparency and accountability to the people.

The National director for cooperate affairs of the NCCE,Mr Samuel Asare Akuamoah also addressing the participants said the Savannah Region is the 7th region to have witnessed the launch of the program in the country. He said the turnup in the region is the highest he has seen after visiting and taken part in the other regions.

Mr Asare said some other places in the country had difficulty with the program and has vehemently opposed it but what he is seeing in the Savannah Region is different since all the stake holders including political parties are endorsing the program.

He appealed also to the media to help in educating the general public since the process will be voting for political parties and not MMDCE’s.

Political parties, religious leaders, traditional authorities, civil organisations etc were all part of the launch of the program with every body endorsing the process since it will lead to development.