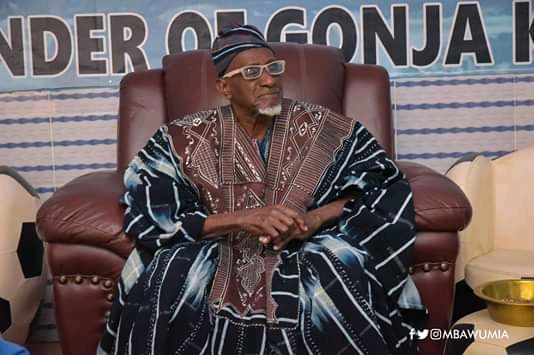 Exactly a year ago the people of Gonjaland woke up to hear from Bole-based Nkilgi that the Overlord of the Gonja Traditional area, Yagbonwura Tuntumba Boresa in collaboration with the West Gonja District Assembly has from 30th July, 2018
Yagbonwura banned logging and burning of Charcoal in West Gonja District. Many are asking whether the ban was really implemented. Read below the full story filed by Nkilgi Fm on 1st July, 2019:

The Yagbonwura announced this after the Youth of Damongo were at his palace last Friday 27th July, 2018 and yesterday 31st July, 2018 Monday to press home the immediate demand for the banning of both logging and charcoal burning.

Yesterday saw over 600 of the youth once again meeting with the Overlord at his palace. The youth gave a one week ultimatum to the those involved in that business to clear what the have in the bushes.

Representing the charcoal burners and loggers, the Sissala chief with some other 8 members pleaded for an extension of time to 4weeks which saw for the first time Yagbonwura becoming extremely angry to the astonishment of everybody at the palace.

Yagbonwura said he feels he is the most disrepected Yagbonwura in the history of the Yagbon skins. According to him, he banned logging and charcoal burning somewhere last year April, giving those into that business a one month period to leave the bushes of Gonjaland.

Yagbonwura said the chief of Tumu led by the Sissala chief of Damongo who was present at the palace came pleading for extension of time to 3months which he Yagbonwura agreed because of the Gonja-sissala relationship only for them to ignore him and to multiply in number to destroy Gonjaland.

According to Yagbonwura (who pointed to a building project ongoing in his palace), he bought wood to roof a building on Palace when according to him wood leave his land on daily basis in trucks to other parts of Ghana. He also told the agitated youth that on daily basis, he personally buys charcoal in pans for his wives for house use when bags of charcoal are loaded to other parts of Ghana with many accusing his palace of having a hand in the activities of the charcoal burning.

He said he is very happy and is solidly behind the youth for taken that action. He thanked the youth and see their action as saving him from disgrace.

He therefore said to the youth not to add even a minute to the one week period given them to pack out but cautioned that he is not sacking Sissalas from Gonjaland but rather the activities of logging and charcoal burning. He advised them to go into farming on his land instead of destroying the forest he inherited from his predecessors.

The Damongo Sissala chief apologised to the Yagbonwura and said some of his men are even here and recognises him as their chief only when the are told to stop their activities. He said he is also in full support that the should pack out within the time period given them.

A memorandum of understanding was therefore signed by the Yagbonwura, the youth of Damongo, the Sissalas, the District Assembly and witnessed by Arocha Ghana, an NGO into afforestation. Nkilgi FM has a copy of the MOU.

It among many issues outlined says;

‘Based on the defiance of the orders by the Yagbonwura and the Gonja Traditional Council, the youth of Damongo in the West Gonja District lodged a complain to the King and Overlord of Gonja about the massive destruction of the environment by the activities of loggers and commercial charcoal production.

His royal majesty Yagbonwura tuntumba Boresa I King and President of the Gonja Traditional council and President of the Northern Regional house of chiefs supported the course for the youth of west Gonja District for their intention to help stop commercial charcoal burning and logging in the west gonja district.

Yagbonwura upon further consultation with all stakeholders have resolved in Damongo that from the 30th of July 2018 commercial charcoal burning and logging has been banned in the West Gonja District.

In order not to cause serious inconvenience to all stakeholders who are deeply involved in this business, the Yagbonwura has therefore given a grace period to allow all affected parties to convey their logs and charcoal from the West Gonja District forest.