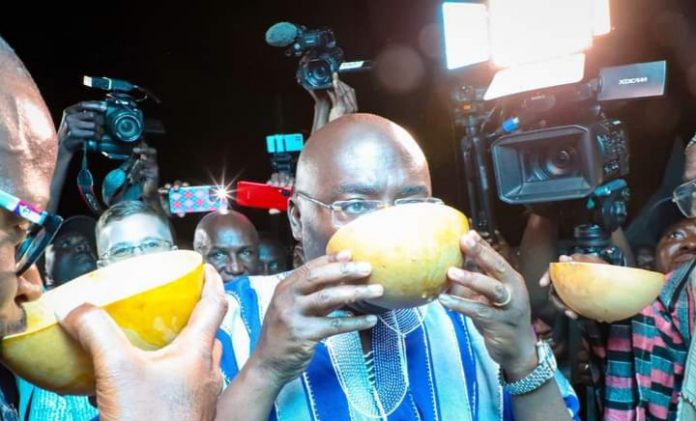 The Vice-President of Ghana Dr Mahamudu Bawumia has commissioned a small town water project for the people of Tuna in the Sawla-Tuna-Kalba district of the Savannah Region on 10th October, 2022, during the day-2 of his visit to the region.

In a speech to welcome the Vice-President, the chief of the Tuna, Tunawura Sarfo Amantana thanked the Vice-President for the honour done to the people of Tuna adding “without water, life is always unbearable since water is life”.

The Tunawura expressed much gratitude on behalf of his people to the NGO for the kind gesture and assured them that the community will take good care of the facility.

He used the opportunity to mention some challenges affecting his traditional area a Police Post in the Jindabor area and also work on the electrification of the system in the area by adding an additional face
since the area is on a single faced system and also upgrade the health center to a polyclinic.

The Tunawura again requested for the construction of the Tuna township roads and also improve the police station to be able to manage crime in the area.

He said the Bamboi to Wa road is in a bad state evident by the Vice-President and pleaded for it to be worked on.

He told the chiefs and people of the area that he was as a matter of urgency by close of day Tuesday 10th October 2022 given the Police Station in Tuna through the Inspector General of Police a pickup and also assured them of the establishment of a police station in Gindabour to improve police visibility in the area.

He added that the Sawla-Tuna-Kalba District will have some 52 communities connected to the national grid with a consultant expected soon in the area adding that the government has constructed some Boreholes in Soma, Kulmasa, among other five communities in the district and will do more to end water crisis in the area with plans far advanced to upgrade the Tuna health clinic to a polyclinic very soon.

The Vice-President further assured the people of Tuna that the road to Wa will also be worked on.

”He Nana Addo Government Government cannot boast of doing all but the all working to develop the region”; he said.

Meanwhile, a group inside Tuna led by the NDC IT officer in the Sawla-Tuna- Kalba Constituency and a deputy Savannah Regional Communication Officer hopeful, Mr Bodai Gafaru has described the commissioning of the Tuna water project by Dr Bawumia as a scam and waste of resources since the project was commissioned some two years ago somewhere in 2018.

He explained that the project was executed to provide subsidized clean water for the Tuna community and expected to be managed for a period of 1 year by the NGO at specific points where the water will be supplied and after 2020,extension of pipelines to the homes of residents will kickstart.

He explained further that during the election in the year 2020, the govt with the desperate bid to stay relevant allegedly forced the NGO to supply free water to residents for a month that made the government to owe the NGO close to about GHc50,000 which is still not paid as at now.

Mr Bodai said the NGO was forced into selling ownership to a private investor.

Mr Gafaru with a team numbering more than 10 young men and women with placards with inscriptions advised the Vice-President to consider working towards rising inflation rate in Ghana instead of taking credit for what he knows nothing about.

The group was attacked by some NPP youth in the area, destroying the placards and scattering them away from where the program was taking place.