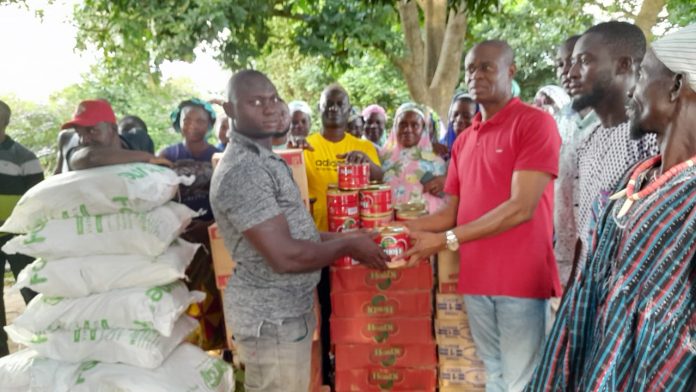 The Member of Parliament (MP) for the Bole-Bamboi Constituency Hon. Alhaji Yusif Sulemana on 30th September, 2022 rushed to Ntereso, a community in the Bole District to have a first time information about a flooding situation that occurred on 29th September, 2022.

Ntereso which is more than a mile from the Volta River to the west of Bole overflown its banks flooding the community and resulting in houses being carried away, food stuffs and valuables lost and as well rendering many homeless. Members of the Community resorted to using canoes to move from one part of the community to the other.

The Ntereso Community has seen frequent flooding from the waters of the Black Volta as a result of the construction of the Bui Dam.

Speaking at a short ceremony at Ntereso, Alhaji Yusif Sulemana said when he saw the pictures of the community being flooded, he was disheartened and so mobilised himself to rush to the community to support them with some items to lessen their suffering immediately after the flooding.

The Bole MP said a school he helped to build for Ntereso and a borehole he dug fir the community were also submerged.

He called on the Bole District assembly, Non Governmental Organisations, the National Disaster Management Organisation (NADMO) and philanthropists to come to the aid of the people of Ntereso.

The MP revealed to the people that the Bui Power project was supposed to resettle them but that has not been done. He assured the people he will follow up with a letter to remind the Bui Power Authority of their resettlement plan for the Ntereso community.

Alhaji Yusif Sulemana also mentioned to the people in the community that the construction of the Bole-Manful-Gbenfu-Ntereso to Dollar power road will be commences in due course.

He said he is aware the Ghana boundaries commission under the Minister of Lands and Natural Resources at a point wanted to construct a road to “Dollar power” which is a small scale mining community.

He said he recommended to them that they should start from Bole to Genfu to Ntereso and to Dollar Power.

The MP said if the road is to be constructed from Wakawaka on the main Bole to Techiman road to Dollar power, the cost would be high.

Alhaji Yusif Sulemana assured the people to keep praying for long life because he will do all he can for the road to be constructed.

A community leader at Ntereso called Alhaji Abubakari on behalf of the entire thanked the MP and his team for coming to their aid.

Alhaji Abubakari said for the MP to intervene so quick with those items to support them means he has them in his heart.

He added they will also do all to reciprocate when the needs comes.