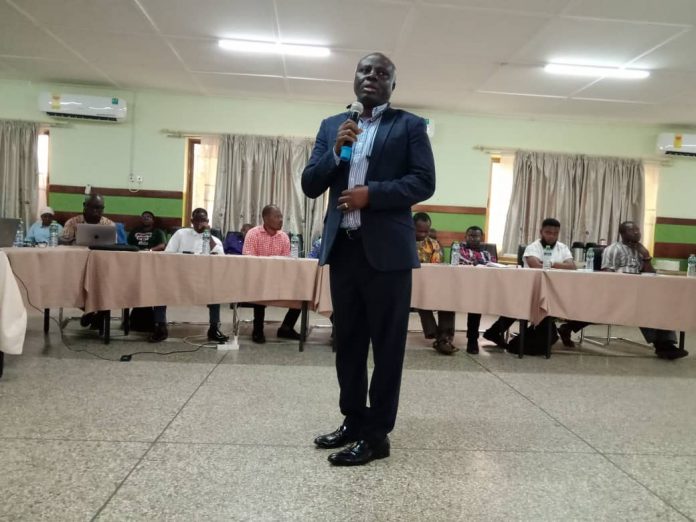 The Managing Director of the Northern Electricity Distribution Company (NEDCo), Mr Osmani Sayid has appealed to the Ghana Journalists Association (GJA) and various media practitioners in the Northern, Savannah and North-East Regions to help sensitize residents in the regions and further educate the general public on how electricity power is transmitted to the final consumer, reasons why power outages sometimes occur and also, reasons why they must pay for electricity power consumed.

Speaking at a one day workshop for selected media men in Northern Ghana,made the call at Tamale on Tuesday 27th September, 2022, during a sensitization seminar by the company, Mr Sayid explained that NEDCo is not the main producers of electricity used and that NEDCO also buy the power from the Volta River Authority to supply their customers.

He indicated that the media serves as a linking point between the general public and NEDCo and also the voice of the voiceless in the society and therefore used the opportunity to count on the media to educate the general public about the services of NEDCo energy services to the public since that will help them keep the good relationship between the public and Nedco as sometimes the public finds it difficult to understand the charges and the increments they make.

The NEDCo Director in charge of Commercial activities, Mr Alexander Ottu Larbi, on his part called on electricity consumers to pay their bills to ensure efficient service delivery and further emphasized on
how some customers resulting to illegal power connection which is affecting the company’s finances and efficient service delivery and further resulting to overloading of transformers leading to drop in voltage of the main supply.

He added that through illegal connections, frequent power outages and cuts, leads to damages to electrical appliances.

He disclosed that NEDCo loses GHS 8.5million which is about 45% of revenue in the Northern Region every month due to power theft.

“We are in the business of buying electricity and distributing it to customers and so whatever energy we distribute to customers we have to get the revenue back and the only way we can do that is by customers paying”; he said.

He stressed that without revenue coming in there is no way NEDCo can deliver efficient service to its customers adding that the lack of payment by customers is affecting the company.

“The consumption in the Northern region is the highest and that is where we also lose so much in terms of energy and mainly power theft. People are selling power and that is affecting us so much. So we are here to serve our customers and to give them reliable power and we also want them to reciprocate by paying their bills promptly”; Mr Alexander noted.

The Director of Engineering of NEDCo
Ing. John Yamoah, on his part bemoaned the high rate of cable theft which according to him is often carried out during the night and very popular
across the north causing power outages especially in most communities in the region.

He used the opportunity to call on the general public to report persons engaged in those activities to the NEDCo for appropriate actions to be taken.