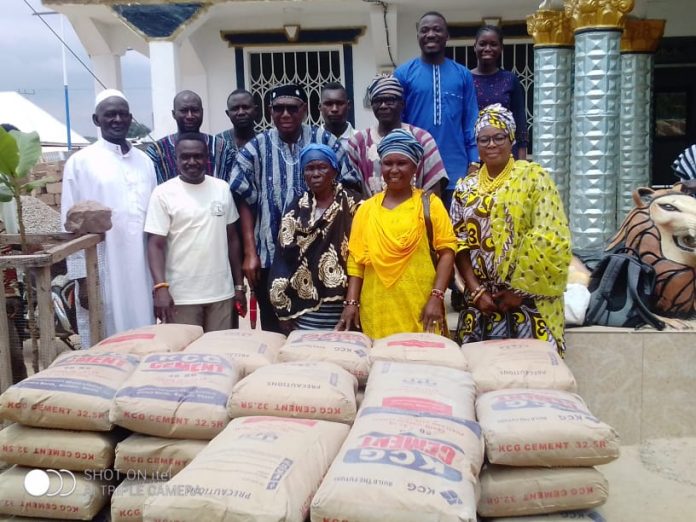 A non governmental group ‘Dream For Gonjaland Foundation’ has pledged to help renovate the Bole Kurabaso School as part of plans to celebrate the 40th year demise of the late King of Gonja Yagbonwura Abudu Mahama Kurabaso who reign from 1975 to 1982.

Dream for Gonjaland is an NGO seeking to partner with other stakeholders in Gonjaland to address the development of Gonjaland.

A grandson of the late Gonja King and Founder of Dream For Gonjaland Mr Haruna Alhassan Benjamin paid a courtesy call on the Paramount Chief of the Bole Traditional Area, Bolewura Sarfo Kutuge Feso (l) on Friday 8th July 2022, to donate 60 (sixty) bags of cement to be handed to the Sarfope royal gate where the late King hails from, to be used for the renovation of the Kurabaso School.

Speaking to Bole based Nkilgi fm, Mr Alhassan said the Kurabaso school named after the late Gonja King is delapidated with all the windows, doors and the walls in a bad situation which requires urgent renovation.

According to him plans are far advanced to complete the renovation before the (23rd of November 2022) a date that marks the exact 40 years of the demise of Yagbonwura Kurabaso Mahama who passed on on 23rd November, 1982.

Meanwhile Mr Haruna Alhassan Benjamin has called on the Sarfope royal gate of Bole, old students of Bole Kurabaso School and all well wishers to help with the renovation of the school.

Yagbonwura Kurabaso Abudu Mahama ascended the Gonja Kingship from 1975 and passed on in 1982 (7 years rein).

Due to his great leadership, many infrastructural projects such as schools, markets and communities in Gonja (Savannah Region) have been named after him.