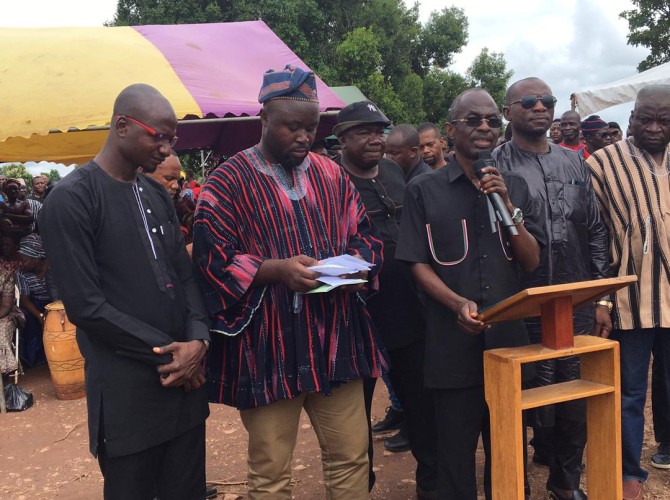 The General Secretary of the National Democratic Congress (NDC) Mr Johnson Aseidu Nketia has said the people of the Sawla-Tuna-Kalba constituency will attest to the good works of their former Member of Parliament (MP) Hon Dari Soditey through his facilitation and provision of educational infrastructure, extension of electricity to many communities in the constituency.

According to the NDC General Secretary, Hon Dari Soditey is gone but he believes one thing that will always gladden his heart will be for the NDC to continue not only winning Sawla-Tuna-Kalba constituency for the NDC but to continue increasing the margin of the party’s victory in the constituency.

Speaking at the funeral and burial ceremony of the late MP for the Sawla-Tuna-Kalba constituency on 2nd July, 2022, Mr Johnson Aseidu Nketia who represented former President John Dramani Mahama and the National Democratic Congress (NDC) party narrated how he has met with the former MP and how dedicative he was serving the NDC party and his constituents.

Mr Aseidu Aseidu mentioned that Hon. Soditey was the constituency Chairman of NDC for the Sawla-Tuna-Kalba constituency and has served the party well especially at a time the NDC party notorious constituency for some disagreements.

“Hon. Soditey will be described as an MP who was not too vociferous but he was very active and effective”; he said.

Mr Johnson Aseidu Nketia said it will be very difficult for the New Patriotic Party (NPP) to win the Sawla-Tuna-Kalba constituency because, the NDC is united and what the NPP hate in the NDC is unity.

The NDC General Secretary said former president John Dramani Mahama and the speaker of Parliament planned to attend the burial ceremony but some other urgent engagement have made it impossible and so they duly apologies for that.

Mr Aseidu Nketia made available John Dramani Mahama and the speaker of parliament’s donation GHc5000 each and GHc1000 from the NDC party.

The message of the Gonja Traditional Council and the Bolewura delivered by the Sawlawura expressed their condolences to the family of the late Hon Soditey.

The Sawlawura states that when the information of the demise of Hon. Soditey Dari got to the palace of Yagbonwura, he was saddened because everyone knew the good work he has done when he was alive. He said the late MP as a Teacher taught people in many schools and also an MP and also as an MP did his best for the constituency.

The Sawlawura said the Gonja Traditional Council believing in the late MP appointed him as representative of Brifors on the Savannah Regional House of Chiefs after the creation of the region.

The Sawlawura said the late Hon Soditey wokes effectively to bring peace and unity and to adhre to the traditions and norms of the House of Chiefs.

The District Chief Executive (DCE) Sawla Madam Barikisu Losina Watara on behalf of government and the New Patriotic Party (NPP) extended their condolence to the family of the late Hon Soditey and also recounted the exemplary live he lived. She also said the Sawla-Tuna-Kalba District has lost a great and important personality.

She said the late MP Hon Daniel Dari Soditey has contributed the development and growth of the Sawla-Tuna-Kalba District and his enormous achievements cut across so many human spheres and endeavours.

In 2020, Hon. Soditey was appointed as an ex-Officio member of the Savannah Regional House of Chiefs representing the Lobi-Birifor Communities in Ghana, a position he held till his sudden demise.

The late MP, who was a Catholic, left behind seven children and a wife.