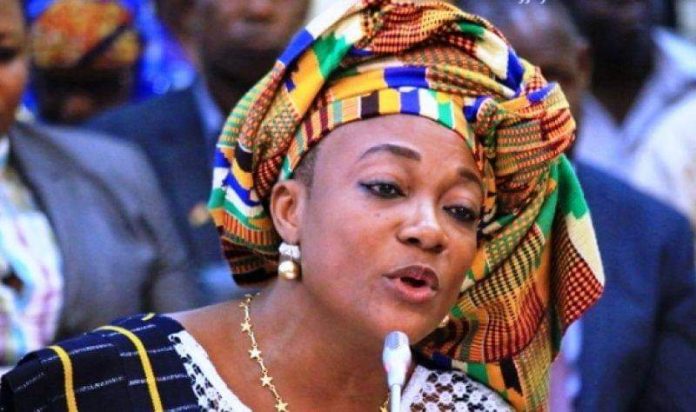 A former Minister of Gender, Children and Social Protection Madam Otiko Afisah Djaba has issued a disclaimer to comments attributed to her by a National Democratic Congress (NDC) activist known as Mr. Elikem Kotoko.

The quote of the attributed statement reads; “Be careful how you defend them, so you don’t get used. Let my situation be a lesson to you. We are not loved by them no matter what we do for them.
~Otiko Afisah Djaba”.

On her Official Facebook page timeline, Madam Otiko Afisah Djaba indicated that, she never made any statement to that effect by voice nor text.

She emphasised that “as a former NPP Parliamentary Candidate for Bole Bamboi, a political activist and communicator, 2 term National Organiser of NPP and former Minister of Gender, Children and Social Protection and on retirement i will never subscribe to such a viewpoint”.

Madam Otiko Afisah Djaba said such reprehensible and malicious post can only be a fabrication from the mind of Mr. Elikem Kotoko.

Madam Otiko Afisah Djaba has urged the general public to please treat the post and account with the contempt it deserve.

Madam Otiko has given an ultimatum to Mr. Elikem Kotoko to pull down the said character assassination post and as well follow the deletion with an unqualified apology to her on his Facebook timeline.

Madam Otiko Djaba also demanded that her request be done within the next 12 hours of this notification to Elikem Kotoko lest she will seek legal actions against him.

She concluded by entreating the general public to ignore this mischievous, vexatious, viperous, and deliberate misinformation publication from Mr. Elikem Kotokoli as same has never been made by her and neither does it represent her viewpoint.

The comments of the former Minister for Gender, Children and Social Protection Madam Otiko Djaba on former President John Dramani Mahama has always been an issue for discussion.

It would be recalled that Madam Otiko Djaba when she was appointed as the Minister designate for Gender, Children and Social Protection in 2017 told the vetting committee of Parliament that she owes no apology to former President John Mahama for some very critical comments she made about him on political platforms.

Otiko Afisa Djaba told members of Parliament’s Appointments Committee some of whom describe her words during the campaign period as unsavoury that she took the former Ghanaian leader to task because they both hail from the same Region and she has the right to subject his actions to critical scrutiny.

She said;
“The President is my brother and I spoke from my conviction”.

Madam Afisa Djaba has on many occasions made some scathing comments about former President Mahama ahead of the 2016 general elections.

She once said President John Dramani Mahama
“has the heart of the devil”.

She describing John Mahama as someone who does not have the interest of the country at heart.

In 2016 Otiko told some NPP supporters in Afram Plains that;
“He (John Mahama) is violent. He recently instigated some youth of the NDC to hurl stones at Nana Akufo-Addo’s house”.

When she appeared before the Appointments Committee of Parliament, the Members on the Minority side, one-by-one quoted these comments and demanded an apology from the nominee.

Asked if she would like to retract her comments against Mr Mahama, Madam Afisa Djaba said she would do no such thing.

She said;
“I owe former President John Mahama no apology”.

According to her, the former Ghanaian leader is her brother and whatever she said about him was done with a good heart.