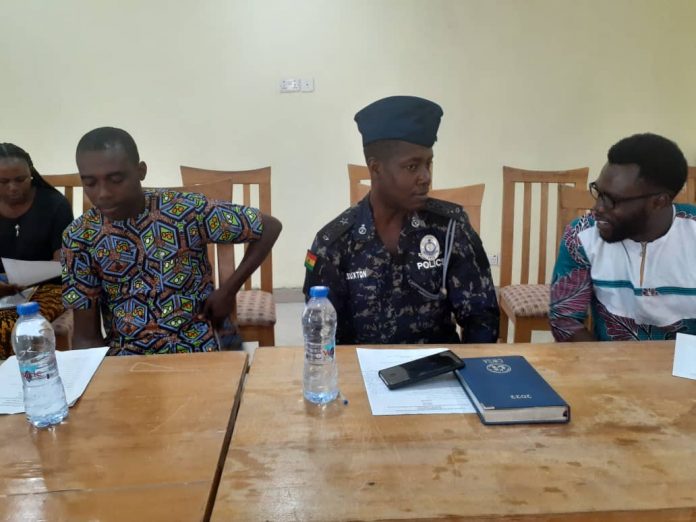 The Catholic Diocese of Damongo together with the Church Relief Services (CRS) held a peace forum in the Bole District of the Savannah region on Friday, 8th of April 2022.

Speaking at the forum held at the Mum & Dad Legacy Lodge in Bole, the Assistant Diocesan Chaplain Rev Fr. Francis Xavier Kanzong said in 2020 they invited the youth and 5 chaplains from the North to Tamale to deliberate on what need to be done to promote and maintain peace in Northern Ghana which he says came at the backdrop of the Bishops in the Sahel region in the Saharan Africa, who saw the need to work towards peace.

Madam Joana Guo who is the Project manager of Catholic Relief Services Youth and Migration Unit on her part said peace is important because there were many disturbances in the neighboring counties around Ghana, a situation that triggered the Catholic Relief Services and the Leadership of the catholic church to start up something like the sahel peace initiative, which promotes peace and social cohesion.

The Bole District Police Commander
DSP Benjamin Buxton, on his part said until one learn how to deal with mosquitoes on his testicles, everyone will appreciate the need for peace in the society.

He called on the good people of the Savannah region to maintain peace and resort to dialogue or pursue issues in court when they feel aggrieved.

He gave a scenario that, mosquitoes can be troublesome when found on people’s testicles, but one needs to be very careful when we want to kill them. Hence no matter how every individual is wronged, there is the need to either dialogue or follow due process in the law court to address our concerns rather than instant justice meted out onto people.

DSP Benjamin Buxton also tasked the public to assist the police to combat crime in the Bole District. He said there were some strange killings and half burials in the Bole tradition Area of Gonja. A situation that made him to be part of the patrol teams on highways. He added that, the police got a tip off about some Nigerians activities which led to their arrest and are currently in court for cyber crime offenses. He also said that, the police protectiveness led to the ban on the use of tricycles at midnight in Bole. And that, investigations are currently going on to get the criminals.

The Chairperson of the program, Somawurche Abudu Ewuche said poverty was the cause of all evil happenings in Bole. She entreated the Bole Police Commander to stop giving bail to criminals even if it was the Yagbonwura, who fall victim of an arrest.

The Damongo Diocesan and Catholic Relief Services later made a donation to the Children’s Ward of the Bole District Hospital. The Donations included 5 bags of Tissue,10 bags of Toilet rolls,20 packs of Voltic Water,3 gallons of Liquid soap,1 gallon of Detol,1 gallon of Parazone, 2 digital Thermometer, 2 digital Sphygmomanometer, 20 packs of Soft drinks and 4 boxes of Biscuits.