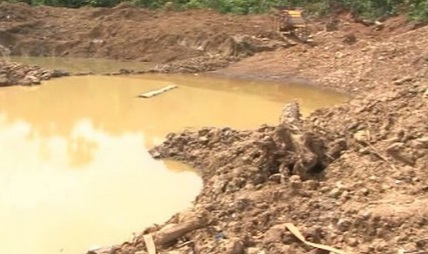 A one and half year old girl whose name was given as Elcy has drowned in a shallow pond containing water at Dakurpe, a galamsey community in the Bole district.

Information gathered by Bole based Nkilgi Fm indicates that the mother of little Elcy was busy working whilst Elcy was also playing around. It got to a point Elcy’s mother and other workers had to go on break for Muslim prayers but the mother could not see little Elcy.

The mother of the little girl went round with other people and realised Elcy was found in an abandoned shallow pond containing water. The little girl was rushed to the Clinic in the community but was confirmed dead.

The body of little Elcy was sent to the Bole police station where an investigator did the necessary checks and later released the body for burial while investigations continue.

Nkilgi fm spoke to the Assemblyman for the Kabilma- Dakurpe Electoral Area in Bole District, Hon Mohammed Abubakari and he comfirmed the incident disclosing it happened around 3:00pm to 4:00pm on Tuesday 15th March, 2022.

The Assemblyman said little Elcy can walk and so was moving round and fell into the abandoned pond containing water that was used in washing sand for gold particles.

Hon Mohammed Abubakari further said the little girl was rushed to the Dakurpe Clinic but was pronounced dead.

The Assemblyman said the police are doing their investigation but the child has since been released for  burial.