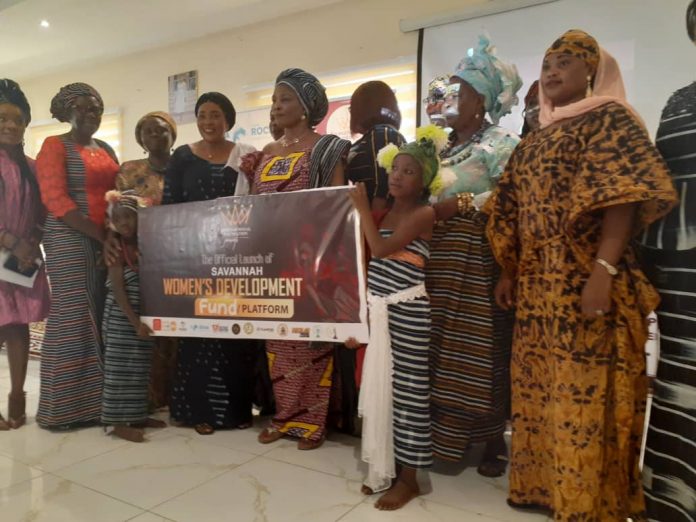 The Executive Director of Boresah Royal Foundation, Nkilgiwuriche Boresah Iddisah Jeduah in her welcome address explained that the Savannah Women’s Development Fund which is an initiative by the Boresa Royal Foundation is to create a pool of resources to enhance women development across the Savannah

She added that, to qualify for support, one must be brilliant and needy, one must have gained admission into any public tertiary institution in Ghana, one must be from Savannah region and must be willing to work as a volunteer in the organization and or render service to the region through national service and that the fund shall be managed by a board of trustees including a patron.

The Special Guest of Honour at the launch, Mrs Joyce Bawa Mogtari called on all women to maintain peace and do away with conflict especially in the Savannah region.

Mrs Joyce Bawa Mogtari who is a special Aide to former President Mahama, added that, poverty and lack of jobs were the problems of Savannah, hence there is the need to take education seriously.

She said teenage marriage, teenage pregnancy and school drop out is the bane of young ladies in Gonjaland.

She also encouraged mothers to strive to be enterprise because the influence of mothers on their children is greater and as well encouraged women in Savannah Region to be assisting each other.

Mrs Joyce Bawah Mogtari mentioned saod it is important to take care of shea trees and be guided against bush fires.

She tasked everyone to support the Savannah Women’s Development Fund and thanked Queen mothers of Gonja for their roles and contributions to the development of the Savannah region.

A former Ambassador to Namibia and former District Chief Executive (DCE) for Bole Her Excellency Hajia Salamatu Forgor in a keynote address advised students to be confident and bold in anything they wish to do.

She said; “I said no to the boundaries of my mother, I stood my grounds to succeed in education at a tender age”.

Hajia Salamatu added; “My husband never wanted me to contribute to any program we attended together, but I defied his orders and that made me confident and bold in facing the public”.

She further said; “We are gradually fading out, hopefully one day, the youth will be in our positions and even become the president of the country”.

The District Chief Executive (DCE) for Bole, Madam Veronica Alele Heming, who represented the Savannah Regional Minister, Mr Saeed Muhazu Jibril said the students present at the forum should be serious with their education because many of the dignitaries present are what they are because of education and encouraged the young students to venture into politics in future notwithstanding the challenges women from the Savannah Region encounter.

She expressed her appreciation to Boresah Foundation for organising the program in the Savannah region.

She said the students should try and build networks or access to the dignitaries present at the program to be their a guides or mentors and that what ever one becomes tomorrow is the sole responsibility of the person.

There were students from the second cycle institutions across the Savannah region, Queenmothers in Savannah region, Savannah region Beauty pageants, Madam Barikisu Losina Watara (DCE for Sawla-Tuna-Kalba), Hajia Katumi Mahama (Savannah Regional Director of the Ghana Education Service) Madam Fari Bodua Mango and many others present at the forum.