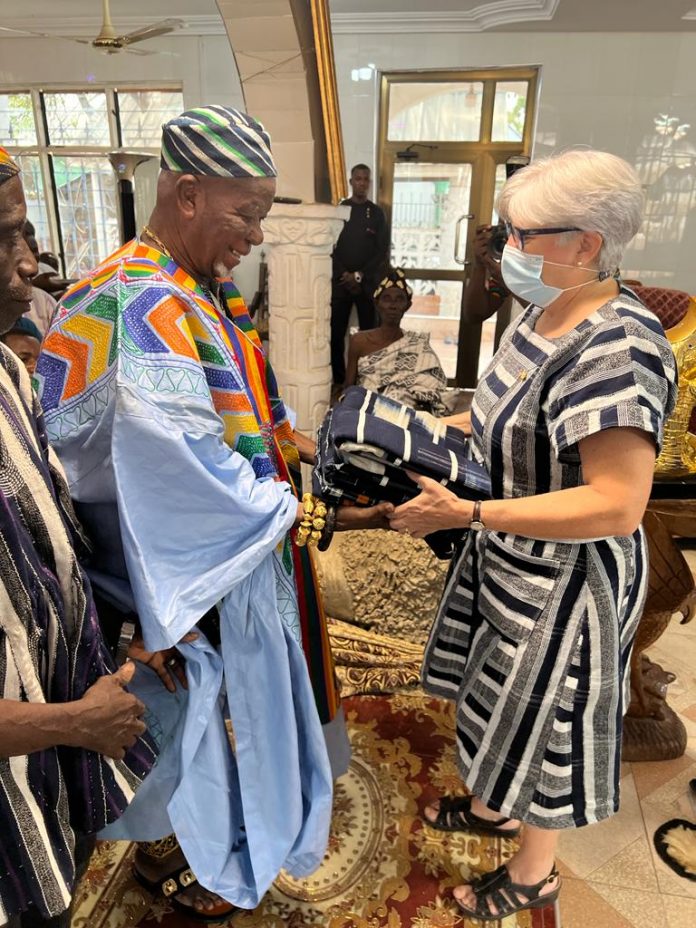 Buipewura who wished the Ambassador well kn her endeavors as she leaves Ghana added that the region is very grateful to the ambassador for coming to celebrate the World Shea Day in 2021 with the people of the region.

“It is a very big legacy you are leaving behind”; Buipewura stated.

The Vice-President of the Savannah Region House of Chiefs further told the ambassador that his traditional area (Buipe traditional area) is a hospitable, well structured and coordinated area which has created a peaceful atmosphere for an integrated harmonious living.

He said the Fulani community for example has been given large acres of land known as Mande to develop a Fulani settlement in the traditional area with Fulanis across the country and beyond hosting two successful National Congress of Fulbes in 2020 and 2021.

The Buipewura thanked the ambassador for her support and cordial relationship and development of the Buipe traditional area adding that her dedicated and benevolent service to mankind and the people of Ghana is immeasurable.

Her Excellency Stephanie Sullivan thanked the people of the Buipe Traditional area and the Savannah region for receiving her entourage.

She said she is very happy and proud of Savannah region ans as well commended the people of the region for their effort in women empowerment especially in the area of preservation of the Shea tree which is a source of livelihood mostly for women.

Ambassador Stephanie Sullivan said there are many projects that her outfit is undertaking in Ghana including health, education and agriculture with the most important one being peace and security since without peace, there can never be development and commended the Chiefs and people of the region for the promotion of peace.

It would be recalled that on July 16, 2021, the U.S. Ambassador to Ghana Stephanie S. Sullivan joined Buipewura Abdulai Jinapor II and members of the Global Shea Alliance (GSA) to commemorate Shea Day with a tree planting event within the grounds of the Yagbonwura’s Palace (Jakpa Palace) in Damongo.

The event was part of the Action for Shea Parklands initiative, which was launched in 2020 to preserve and protect the shea parklands across West Africa.