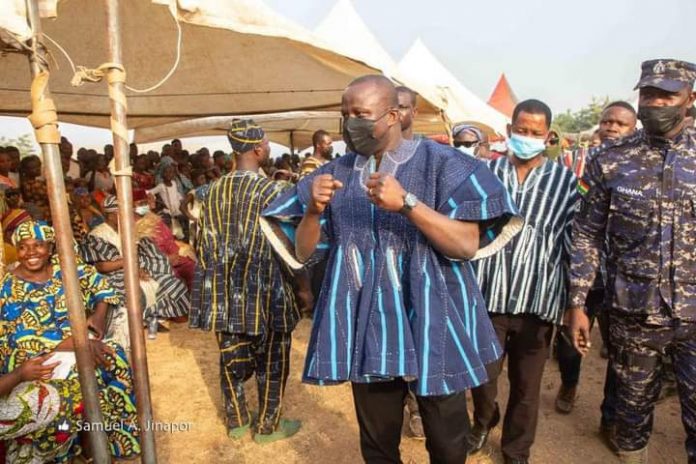 The Minister of Lands and Natural Resources Hon Samuel Abu Jinapor has made a passionate appeal to Gonjas in the Bono East Region especially the Kintampo North Municipality not choose violence as a way to settle issues because that approach is punishable by law.

Hon Jinapor made these comments at the weekend during the Annual Damba of the Chiefs and people of Gonjas in the Kintampo with Mankpanwura Jakpa Achoade Borenyi (I) representing the King and Overlord of the Gonja Kingdom Yagbonwura Tutumba Boresa (I) at the event.

The Minister made these comments in response to some social media reports on alleged comments by the Bono East Regional Minister Mr Adu Gyan that went viral on the Gonja area.

He reportedly said; “You called yourselves chiefs. Let me tell you Gonjas are strangers in this area. The land belongs to Bono and Mo not Gonjas so don’t claim to be chiefs if not I will let police arrest all of you. As a regional minister of this region I won’t sit for people to take the land from my people. Go and tell your Paramount chief. I will deal with you all”

Mr Adu Gyan has since denied ordering for the arrest of Gonja Chiefs in the Kintampo North Municipality.

Hon Abu Jinapor said the statement attributed to the Bono East Regional minister was inaccurate and should be disregarded and a well thanked the Gonja community in Kintampo town led by Chief Kanyiti for organising a successful Damba festival.

He also thanked all other ethnic groups in the area for being able to coexist all these years without any recorded cases of violence or internal conflicts.

Alhaji Amin urged the Gonja Community to always endeavor to promote peaceful coexistence in order to bring the necessary development in their community irrespective of where they find themselves in Ghana.

“we are under rule of law and we must be guided by the principles and the laws of Ghana, especially on matters related to land ownership. No individual or a group of people can make declarations as the ownership of disputed land in Ghana except the Court”; Alhaji Amin added.

He admonished the people to use amicable way of settling their disputes and not to resort to violence and distractions of properties.

The program was attended by other ethnic groups in Kintampo and notable amongst them were the  Wangara community led by Chief Fanyinama, the Sisala, Chokosi, Kaseena, Mo, Bono and the Dagaaba communities in the Kintampo North Municipality.