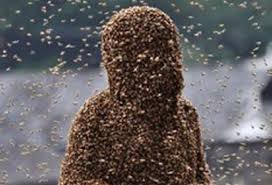 A woman believed to be in her late 50’s was attacked by bees at a farming community in the West Gonja Municipality of the Savannah Region called Kabampe on 3rd February, 2022.

According to an eye witness, the swarm of bees pounced on the woman in the outskirts of the community and was found helpless and struggling by Fulani herdsman.

The herdsman who could not help the woman due to large numbers of the bees rushed to inform the Chief of the community of the unfortunate incident.

The Chief quickly mobilised a rescue team to save the poor woman but unfortunately the bees chased the entire team back into the community.

The Ghana National Ambulance Service was also called to the scene but the bees still overpowered them.

The Savannah Regional Fire Station was contacted and they rushed to the scene fully dressed in their fire fighting attire and with a tricycle, the old lady whose entire head was covered with bees was rescued and brought to the Damongo hospital.

The victim is currently on admission and responding to treatment.