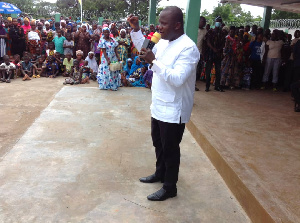 The Member of Parliament (MP) for Damongo constituency and minister for Lands and Natural Resources, Hon. Samuel Abu Jinapor has on 13th August, 2021 launched the Damongo Constituency Women empowerment program, a social intervention programme aimed at empowering women in the constituency in the West Gonja municipality of the Savannah Region.

The programme, which saw in attendance over 2000 women with about Six Hundred and Fifty (650) women benefiting from the scheme took place at the forecourt of the office of the MP in Damongo on Saturday 15th August, 2021.

Addressing the women, the Damongo MP praised the contribution of women in the development of the constituency and reminded them that this was a campaign promise he made to them during the 2020 electioneering campaign which he is much elated to be fulfilling today.

He said the criteria used by the committee for the disbursement is not on partisan,tribal or religious lines since every woman in the constituency must benefit in his initiative.

He said; “this social initiative is a key mechanism in helping women to become financially independent, which will also push them to become even more resilient and better positioned to mitigate their families in times of economic hardship”.

Hon Jinapor further indicated to the women that has received the support from him is not to be used to buy clothes for weddings and naming ceremonies.

He used the opportunity to appeal to them to put the money into judicious use to meet its intended purposes and further pledged to work closely with other stakeholders to raise more funds to support many more women through the program, which he believes will make an impact in their wellbeing.

The Savannah Regional minister Mr Saeed Jibril Muhazu commended the Damongo MP for the initiative and also added his voice to appeal to the women use the money to boost and establish businesses which will in the end be of enormous benefit to them and Damongo Constituency as a whole.

He said what he is witnessing today never came as a surprise to him since Mr Jinapor even before his election as the MP for Damongo had women at heart and has been supporting them.

He asked the Damongo Constituency to continue to pray for the MP since he has a lot in the pipe line for constituency.

Disbursement started with the first 21 women groups in the constituency when the program was disrupted by rains and so the committee will continue the disbursement in the communities.

Present to support the Damongo MP during the launch include the former MP for the then Damongo/Daboya constituency, Chief Gbenapewura Mahama Adam Sakan, the District Chief Executive (DCE) for Bole Madam Veronica Alele Herming, the MCE for the East Gonja Municipal Assembly Mr Mohammed Tamimu and party executives of the New Patriotic Party (NPP).