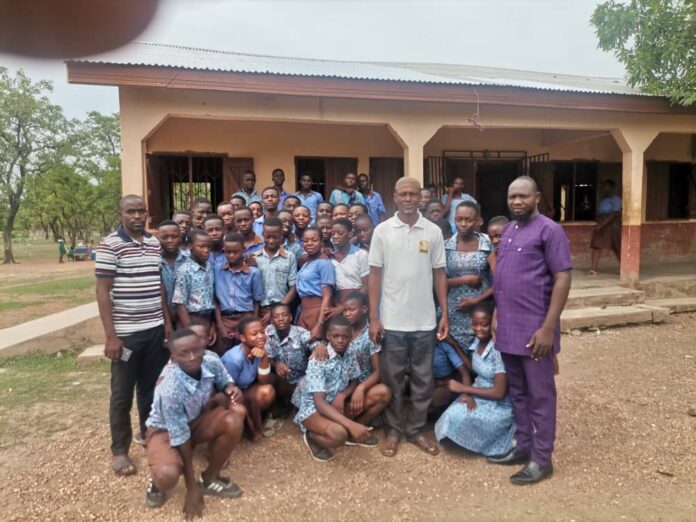 The New Patriotic Party (NPP) Chairman for the Yapei- Kusawgu Constituency of the Savannah Region Mr Alhassan Assase Ketekewu, popularly known as “Chairman Agapet” has renovated the Higher Highest Junior High School in Buipe in the Central Gonja District with his own funds.

Speaking to Bole based Nkilgi Fm, Chairman Agapet said a rain storm affected the school block which caused the school Authority to move the children to a nearby school known as E/A Junior High School to join their colleagues to learn.

Chairman Agapet again told Nkilgi Fm that the school authority approached him and seeked for his support to renovate the school and bring back the children to their own school (Higher High).

He said he promised to renovate the school for them and he is very grateful he has been able to fulfill that in for them in time.

Chairman Alhaji Alhassan further said he was over excited seeing the children very happy when their school was renovated and pledged to make himself available anything the need his support.

Mr Mahama Fuseini who is the Headteacher for Buipe Higher Hight Junior school on behalf of the students, parents and the entire community thanked “Chairman Agapet” for his kind gesture.

Mr. Mahama Fuseini commended Chairman Agapet for always coming to their aid, anytime they need his support from him.

He also urged all stakeholders to emulate chairman Agapet’s style and always make themselves available anytime they need their support.

He said the students were very stranded and worried when the rain storm vandalised the block and they had to move to a different school to join their colleagues.

He added he is the most happiest head teacher today because all the students are happy they will be moving back to their school on Monday, 24th May, 2021.

Mr Mahama said the entire Buipe community is grateful for the quick response of the NPP Constituency chairman to renovate the school for them.